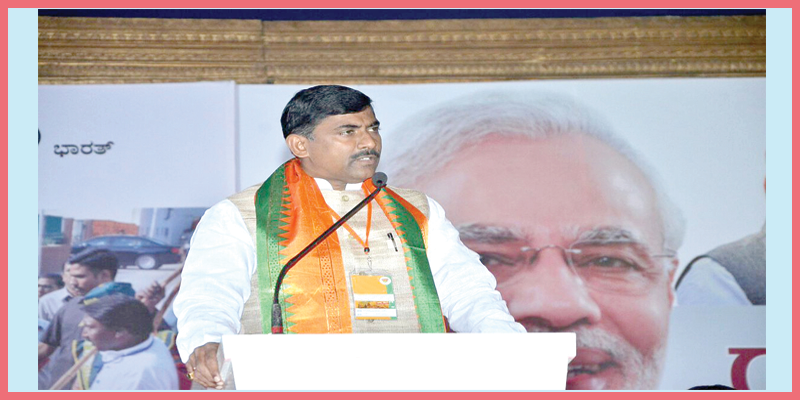 The National Executive of the Bharatiya Janata Party expressed deep condolence on the demise of its beloved and respected leader, the founder President of the party Shri Atal Bihari Vajpayee.

The Condolence Resolution was moved by the BJP National General Secretary Shri Muralidhar Rao on the opening day of the BJP National Executive meeting held at Dr. Ambedkar International Centre, 15 Janpath in New Delhi on 08 September, 2018.


It said, “In Atalji, we have lost a visionary statesman who led this country by example and understood the importance of good governance for the foundation of value-based politics. His foresightedness resulted in massive expansion and development of highways and telecommunication network. “Golden Quadrangle” and “Pradhan Mantri Gramin Sadak Yojana” are the testimonials of his farsighted, visionary approach. Whether it was about linking rivers, or the steps taken to reconnect with the Indian diaspora, Atalji took initiatives on many such issues evolving a model of participative development. “Sarva Siksha Abhiyan” started by him saw increase in school enrolments as also qualitative and quantitative development in education”.
We are publishing the full text of the Condolence Resolution for our honoured readers:

The National Executive meeting of the Bharatiya Janata Party expresses deep condolence on the demise of its beloved and respected leader, the founder president Shri Atal Bihari Vajpayee. In Atalji, we have lost a visionary statesman who led this country by example and understood the importance of good governance for the foundation of value-based politics.

Atal’ji created a credible political alternative to satisfy the aspirations of the public. This became possible only because of his dedication and hard work. Atal’ji could do all this because of his strong commitment to the core of his ideology. This long political journey of Atal’ji is full of struggle and challenges. His political journey was of constant struggle, facing innumerable challenges coming from adverse conditions. The obstacles were many and diverse, ranging from political untouchability to severe resource crunch. However along with Deendayal Upadhyaya, he not only successeeded in overcoming these challenges but also gave a distinct identity to the party. There wouldn’t be any such aspect of Party functioning that Atal’ji had not handled. He did everything with ease, right from cycling long distances to enroll and engage new party workers, to travelling pan-India for collection of donations for the party. He was equally apt in carrying out both, i.e. intellectual as-well-as organization activities. 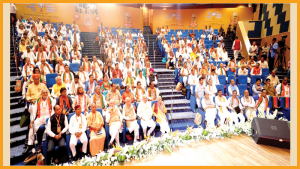 Atalji was a man of many parts. Besides being a thinker of highest order, a talented poet, proficient writer and journalist, powerful orator and excellent parliamentarian, Atalji also proved himself as a popular and successful leader with a vision. Atalji also worked to further strengthen the importance of ideology in politics. As a Prime Minister he set an example of his commitment and sensitivity on several issues of larger public interest; and while in opposition, he presented an example of an ideal leader of opposition. Both, in and outside parliament, his deportment elevated the dignity of politics and his style of working evoked and reinforced trust in democratic institutions. He established new examples of “Coalition Dharma” and demonstrated to the world the ways in which coalition politics can be made successful in India.

While in Government, Atalji’s contribution remained multidimensional. While serving as the Foreign Minister he successfully struck a balance in India’s foreign policy, realising both the importance as well as limitations of Non-Alignment. It was Atalji, who was instrumental in laying the foundation of a new bonding between India and Israel. It was he who deivered the first address in Hindi as foreign minister in the UN General Assembly, instilling a sense of pride in every Indian. Acutely conscious of the principle of continuity with change, he added Jai Vigyan to Jai Jawan, Jai Kisan; undesrcoring his modern, pragmatic thinking.

Atalji was bestowed with unmatched insight into politics, economic issues, public policy and governance in general. Even on the issue of economic liberalization and privatisation, he ensured equilibrium by prioritising larger public interest. It was during his tenure that important laws relating to economic accountability and financial discipline were framed. His foresightedness resulted in massive expansion and development of highways and telecommunication network. “Golden Quadrangle” and “Pradhan Mantri Gramin Sadak Yojana” are the testimonials of his farsighted, visionary approach. Whether it was about linking rivers, or the steps taken to reconnect with the Indian diaspora, Atalji took initiatives on many such issues evolving a model of participative development.

“Sarva Siksha Abhiyan” started by him saw increase in school enrolments as also qualitative and quantitative development in education.

As prime minister of the country he made many significant and successful efforts to strengthen good relations with our neighbouring countries. He remained steadfast and undeterred in successfully carrying out the historic Pokhran nuclear test which was extremely significant from India’s defence preparedness.

Atalji provided momentum not only to Indian politics but also rejuvenated all aspects of governance and provided a new direction. By renaming “Social Welfare Ministry” as “Social Justice Ministry” he initiated a new thought process. The creation of independent Ministry of Tribal Welfare was also his initiative. For the hitherto neglected north-eastern India, the establishment of separate ‘DONER’ Ministry reflected his vision. With a view to giving momentum to development in tribal and hilly regions, he worked untiringly to create three new states – Chhattisgarh, Jharkhand and Uttarakhand. Thanks to Atalji’s style of functioning with consensus building at its core the creation of three new states happened without any friction.

Whenever we remember Atalji and the challenges he faced, his contribution in the struggle against emergency cannot be forgotten. In the service of democracy, Atalji braved long imprisonment. When democracy was threatened, he struggled to save it; and when he was Prime Minsiter, he tried to strengthen it in many ways. Students of democracy in India cannot forget that it was because of Atalji that a ceiling was introduced on the size of Cabinets, both at the Union and State Govts. Besides, he introduved amendments to make Rajya Sabha elections more transparent and free from corruption and also attempted a srious review of the implementation of Constitution.

With Atalji, all of us have lost our guiding light, a thought leader, a statesman who led us on the path of good governance. He not only adroitly served as a national leader but also emerged as a true instituion builder while establishing new ideals for the genrations to come. He has left an indelible mark on national politics and democratic govrnance.
This National Executive of the Bharatiya Janata Party pays its humble tributes to Sh. Atal Bihari Vajpayee and resolves that we will continue to tread tirelessly on the path laid by him and take forward the politics of good governance and development with full vigour.