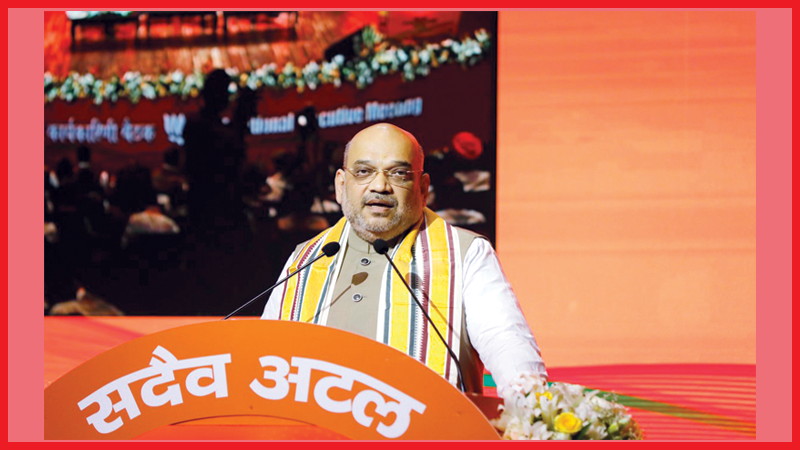 Addressing the inaugural session of the two-day National Executive meeting held at Dr. Ambedkar International Centre, 15 Janpath in New Delhi on 08-09 September, 2018, BJP National President Shri Amit Shah in his inspiring address said that Prime Minister Shri Narendra Modi ji has been promoting his vision of “Make in India” while the Congress Party is pursuing “Break in India” agenda. People of India will give a fitting rebuff to the Congress party for its casteist and divisive agenda for the sake of vote bank politics.

Shri Amit Shah said in all the states going to polls later this year BJP will secure better results than it did in the last elections and under Prime Minister Shri Narendra Modi’s leadership, the BJP will secure a bigger mandate in 2019 than in 2014. We are publishing the excerpts of his Presidential address for our valued readers:

Under Prime Minister Narendra Modi’s leadership, the BJP will secure a bigger mandate in 2019 than in 2014.

–In all the states going to polls later this will secure better results than it did in the last elections.

–Prime Minister Narendra Modi ji has been promoting his vision of “Make in India” while the Congress Party is pursuing “Break in India” agenda. People of India will give a fitting rebuff to the Congress party for its casteist and divisive agenda for the sake of vote bank politics.

–The people of India are standing up with the Prime Minister Shri Narendra Modi ji and BJP on our positive agenda even as the opposition is resorting to politics of lies and myths.

–People are standing with grit and determination to support the leadership of Prime Minister Narendra Modi ji and the BJP.
Our continued commitment and resolve for development will defeat the opposition’s attempts at spreading rumours and propaganda.

–A failed, desperate Congress Party has been indulging in politics of casteism and minority appeasement but people of the country have rejected this time and again.

–The so-called grand alliance of opposition parties is nothing better than desperate attempt for self survival and self aggrandizement. All the parties which are a part of this so called grand alliance fought against us in 2014 and lost elections. In 2019, they will face a bigger defeat than in 2014.

–When Shri Narendra Modi ji became the prime minister in 2014, India was the 9th largest economy in the world which has now jumped to the 6th position. We are fast emerging as the 5th largest economy. All this advancement became possible only due to unparalleled economic governance.

–In the first quarter of this year our economy has grown by 8.2%. At this rate, we have the distinction of being the fastest growing large economy in the world today.

–Our stand on the National Register for Citizens is absolutely clear. We have undertaken the task of identifying illegal immigrants as this is our commitment. We have shown consistency in our stand. Parties like the Congress have been forced to change their stance because of our clear and unambiguous stand.

–The Congress Party which gives precedence to its vote bank politics over national interest stands completely exposed before people of the country today.

–We are pursuing citizenship Amendment Act which will enable us to give refugee status to religious minorities like Hindus, Buddhists, Sikhs and Christians who do not have adequate protection in our neighbourhood denominations. We will give them respect and citizenship so that they can lead a life of dignity.

–The Congress Party has not allowed the triple Talaq bill to be passed in Rajya Sabha as they are not committed to ensuring equality for Muslim women. They have done this at the altar of vote bank politics. The Congress party will have to support this bill and we will come tell them to do so as we have done in the case of National Register of Citizens(NRC).

–People who have been arrested for their links with Maoists in arming and financing them to destabilize our country have also planned to target Prime Minister’s Road shows and even hatched a conspiracy to assassinate him. In a bizarre and shameless manner, the opposition parties are standing with such elements who are posing a threat to National Security.

–I would like to congratulate Maharashtra government for acting against such people with grit and determination. People of the country are watching these developments and will not spare the opposition parties for their support to such elements.

–Modi ji’s government has given farmers of this country a huge increase in Minimum Support Price (MSP) raising it to 1.5 times the cost of production Through Ayushman Bharat Prime Minister Modi Ji’s government is benefiting 10 crore families or 50 crore people with the health insurance cover of Rs.5 lakhs every year completely free of cost for free Healthcare services.

–Our government has taken the historic decision by giving constitutional status to the National Commission for Backward Classes (NCBC). This demand has been pending for several decades and our government has fulfilled this long standing demand.

–By derecognising over 3 lakh shell companies our government has taken a strong decision against black money and money laundering. We have also made rules under Benami Act to act against holders of benami property.

–Modi ji’s government has made huge contributions for improving the quality of life of the poor people in the country. Through over 126 people welfare programmes, more than 50 crore people of the country have been benefited.

–The Central Government has ensured that there is saturation coverage I.e 100% coverage of 7 developmental programmes in 65,000 villages of the country. In the next few months, this number will go up to 1.2 lakh villages. The coverage and the scale of our developmental activities is indeed humongous.

–The state of Kerala has experienced this century’s worst floods. The state is going through very difficult times. We extend our condolences to all those who suffered the fury of these floods. Our party’s members and our ideological Parivar have extended there help and services to the state in this hour of need.