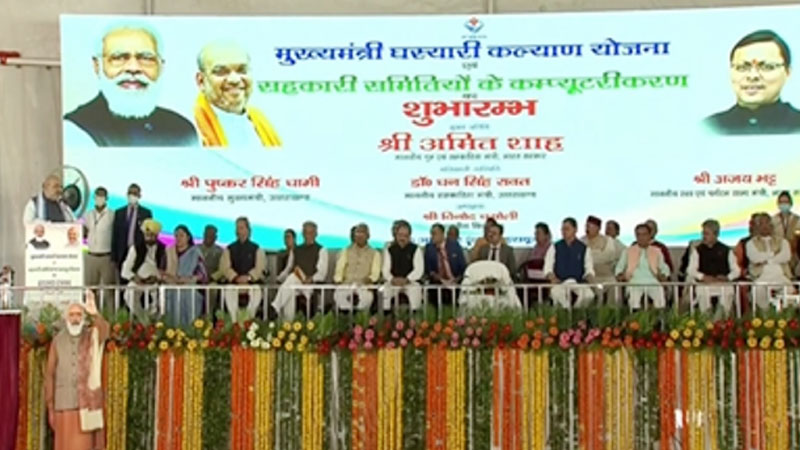 The Union Minister of Home Affairs and Minister of Cooperation, Shri Amit Shah launched the ‘Mukhyamantri Ghasiyari Kalyan Yojana’ and computerization of cooperative societies in Dehradun, Uttarakhand on October 30. Many dignitaries including the Chief Minister of Uttarakhand, Shri Pushkar Singh Dhami and Union Minister Shri Ajay Bhatt were present on the occasion.

The Union Home Minister said that today three programs have been started. First, work of computerization of all the PACS (Primary Agricultural Credit Society) of Uttarakhand has been completed today. With computerization, PACS members do not have to deal with any scams. Computerization helps in direct linkage of PACS with district banks, district banks with state cooperative banks and state cooperative banks with NABARD and all schemes of farmers reach farmers directly through PACS.

Shri Amit Shah said that the second major work that has been done is the launch of Mukhyamantri Ghasiyari Kalyan Yojana. We know that women face great difficulty in providing fodder for animals in the hills in adverse weather conditions. Here about 2,000 farmers will cultivate maize on about 1,000 acres of land and a plan has been made to make nutritious animal feed in a scientific way, which will benefit about one lakh farmers.

He said the third work that has been done is the inauguration of the Cooperative Training Center. These cooperative training centers are very important to take cooperative movement forward.

The cooperation movement was weakened by previous governments, but Prime Minister, Shri Narendra Modi has done a great job for the welfare of crores of farmers, women, workers and fishermen who are associated with cooperatives, by creating a new Ministry of Cooperation in the year we are celebrating Azadi Ka Amrit Mahotsav.

Shri Shah said that the opposition wants to gain power and use it and never works for welfare of the people. He said that those who believe in appeasement can never work for welfare of Uttarkhand. Shri Shah said the previous government did not do any good work for Uttarakhand and the winds of development came to the state only when the people of Uttarakhand elected BJP with full majority.

Shri Amit Shah said work has begun for distribution of Gangajal through cooperatives, which will enable devotees of Maa Ganga across the country receive Gangajal at home and will also open the way for their salvation.


BJP Senior leader and Union Minister for Home and Cooperation Shri Amit Shah addressed the program ‘Shantikunj Golden Jubilee Year Lecture Series – Rise of Divinity in Man and Land of Heaven on Earth’ organized at Shantikunj, Haridwar on October 30. Shri Shah praised the role of Shantikunj Sansthan in the revival of culture and the tireless efforts being made under the leadership of Prime Minister Shri Narendra Modi to elevate the country to the position of Vishwaguru.

Shri Shah said this year is the Golden Jubilee of Shantikunj as well as the Amrit Mahotsav year of Independence. The time of 50 years is a very short time for any organization to bring change in the country and society and Mahamanav Pandit Shri Ram Sharma Acharya ji was aiming to bring change in the era, not in the country or society. Shri Shah said that only by following the path shown by Pandit Shri Ram Sharma Acharya ji and Pujya Mata ji, we can achieve the goal of change of era.