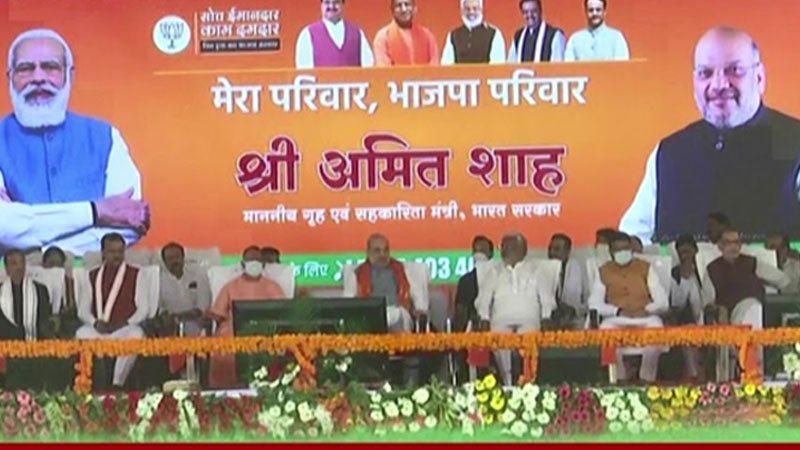 Addressing the gathering Union Home and Cooperation Minister Shri Amit Shah said that from the time of Mughal rule till the BJP government came in 2017, the people of Uttar Pradesh did not realize that this is the land of Baba Vishwanath, Lord Shri Ram, Shri Krishna and Gautam Buddha. This is the land of ascetics, sages and great freedom fighters. The parties like SP, BSP and Congress had eroded the identity of Uttar Pradesh. Under the leadership of Prime Minister Shri Narendra Modi, CM Yogi Adityanath has given a different identity to Uttar Pradesh, has worked to make it the most prominent state of the country.

Shri Shah said that in a democracy, governments are not meant for any family, but for the upliftment of poorest of the poor. In Uttar Pradesh, SP, BSP and Congress have ruled either for themselves, or for their family or for any particular caste, they have not taken any step regarding the all-round development of Uttar Pradesh.
While launching statewide booth membership campaign, Shri Shah said that 86 lakh workers of BJP are engaged in this booth membership drive. BJP’s membership drive will start from, October 29 and will continue till December. I want to call upon the party karyakartas that not a single house should be left in Uttar Pradesh where the BJP sticker is not installed.

Shri Shah said that I am indebted to Uttar Pradesh. Prime Minister Shri Narendra Modi has won the elections with full majority with the blessings and affection of the people of Uttar Pradesh. No one could have imagined that Shri Ram Janmabhoomi temple would be built in Ayodhya.

He said BJP government has made a drastic change in the development of Uttar Pradesh.

• In 2017, when the BJP government was formed in Uttar Pradesh under the leadership of Yogi Adityanath, then UP was at the seventh place in term of economic development in the country but today Uttar Pradesh is in second place.
• During the Akhilesh Yadav’s government, the budget of Uttar Pradesh was Rs 10 lakh crore, but today the budget of UP has increased to Rs 21.31 lakh crore under the double engine government.
• In terms of Ease of Doing Business, Uttar Pradesh was ranked 14th at the time of the SP government’s departure, but in the five years of Yogi government, UP has come second.
• In the SP-BSP government there were only 12 medical colleges in Uttar Pradesh, the number of medical colleges in our government has increased to 30. Our target is to increase this number to 40 before 2022.
• The number of airports in Uttar Pradesh increased from 4 to 9 in the last five years. Expressway was only 2 earlier, there are 5 new additions in our government.
• Defense corridor has also been made in the state under our government, dedicated freight corridor has also been made and education and medical infrastructure has also improved a lot.