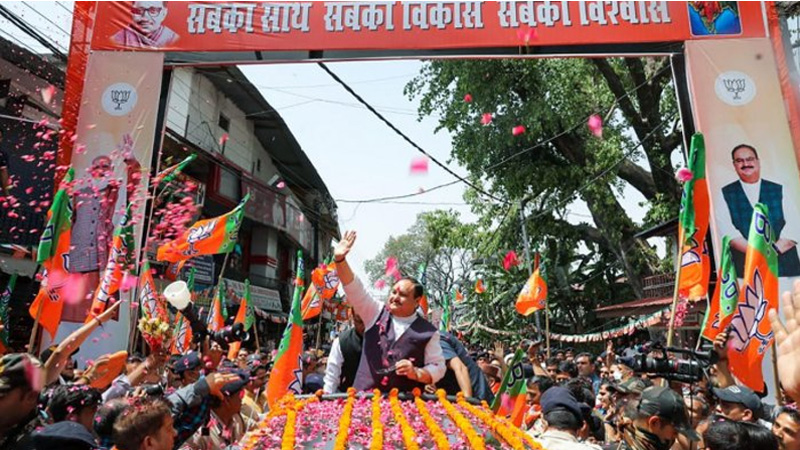 The BJP National President Shri JP Nadda in a two-day visit to Himachal Pradesh arrived in Kangra on 22 April, 2022 and attended a number of public programmes, including a road show and a massive rally in Nagrota Bagwan, Kangra. The BJP National President received a grand welcome by thousands of party Karyakartas, common people and BJP leaders on his arrival to Kangra.

Addressing a huge rally after the road show, Shri JP Nadda said the Bharatiya Janata Party is synonymous to development and progress.

Shri Nadda said Prime Minister Shri Narendra Modi is the real ‘Vikas Purush’ under whose guidance and leadership the nation is progressing fast in every field and the Jairam Thakur government in Himachal Pradesh is giving its best contribution in this journey of growth and development.

He said the double engine government of the Bharatiya Janata Party under the leadership and guidance of Shri Narendra Modi is giving a pro- active, pro- people and pro – responsive government which is accountable to the people of the country, which is promoting nationalism and national integration, which is highly committed to the welfare of the people and for growth, development, progress and prosperity of the nation.

Hon’ble Shri Atal Bihari Vajpayee had given industrial package to Himachal Pradesh for 10 years, but when the UPA government under the Congress party came to power it stopped the special package in its 8th year.

He said under the Bharatiya Janata Party government led by Shri Narendra Modi Kol Dam was constructed, while work started in Luhri and Renuka Dam projects and Atal Tunnel project which was stalled by the Congress party led UPA government was also completed under Shri Modi. Two other major projects which are currently under construction in Himachal Pradesh under the Narendra Modi Government are Indian Institute of Management and AIIMS.

HIGHLIGHTS OF THE SPEECH

• The massive victory of BJP, under Shri Narendra Modi in Uttar Pradesh, Uttarakhand, Goa and Manipur has proven that the people have shunned politics of casteism, communalism, appeasement and dynasty politics.
• The people are firmly behind the party which is for development, growth, nationalism and does welfare of the poorest of the poor.
• The Bharatiya Janata Party has formed its government in Uttar Pradesh, Uttarakhand, Goa and Manipur and now with the blessings and support of the people we are once again going form our governments in Himachal Pradesh and Gujarat.
• In these two states also the Bharatiya Janata Party, under the leadership and guidance of Shri Modi, will form its governments, the lotus will bloom once again.
• During the Corona pandemic over 135 crore got free vaccination by the Narendra Modi Government and protected the country and showed the world how to manage and fight the global medical crisis.
• Prime Minister gave free rations to over 80 crore poor and needy people across the country under the Pradhan Mantri Gareeb Kalyan Anna Yojna so that not a single person should sleep empty stomach.
• Himachal Pradesh is top state in Covid vaccination drive in both dosages. And for this I thank and congratulate Himachal Pradesh CM Shri Jairam Thakur, all health and paramedical staff and state government employees to make this happen.
• Total vaccination in remotest locations of the Himalayan state is a highly commendable job done under the double engine government of the Bharatiya Janata Party.
• Narendra Modi Government brought back 2,300 students from war hit Ukraine, of these 426 students were from Himachal Pradesh.