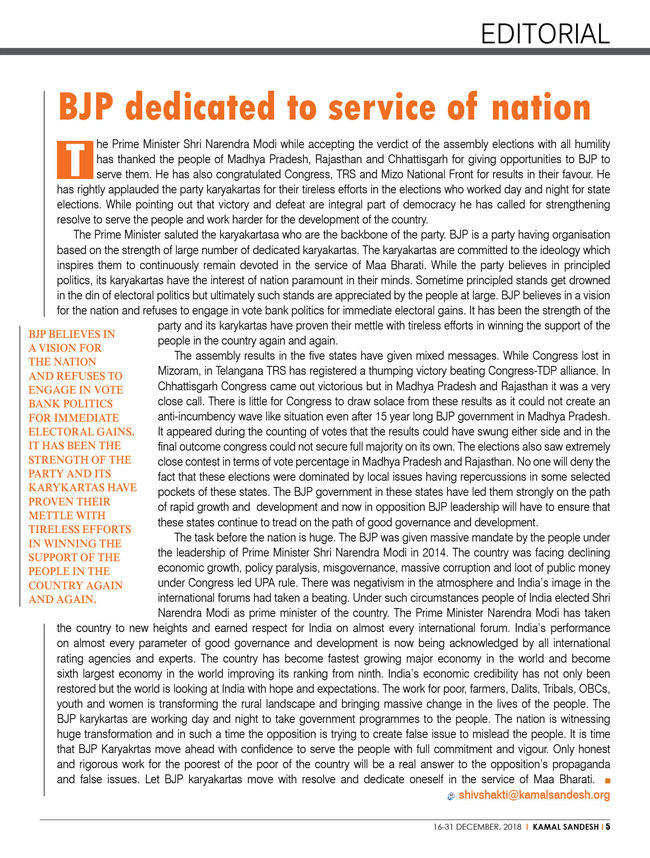 The Prime Minister Shri Narendra Modi while accepting the verdict of the assembly elections with all humility has thanked the people of Madhya Pradesh, Rajasthan and Chhattisgarh for giving opportunities to BJP to serve them. He has also congratulated Congress, TRS and Mizo National Front for results in their favour. He has rightly applauded the party karyakartas for their tireless efforts in the elections who worked day and night for state elections. While pointing out that victory and defeat are integral part of democracy he has called for strengthening resolve to serve the people and work harder for the development of the country.

The Prime Minister saluted the karyakartasa who are the backbone of the party. BJP is a party having organisation based on the strength of large number of dedicated karyakartas. The karyakartas are committed to the ideology which inspires them to continuously remain devoted in the service of Maa Bharati. While the party believes in principled politics, its karyakartas have the interest of nation paramount in their minds. Sometime principled stands get drowned in the din of electoral politics but ultimately such stands are appreciated by the people at large. BJP believes in a vision for the nation and refuses to engage in vote bank politics for immediate electoral gains. It has been the strength of the party and its karykartas have proven their mettle with tireless efforts in winning the support of the people in the country again and again.

The assembly results in the five states have given mixed messages. While Congress lost in Mizoram, in Telangana TRS has registered a thumping victory beating Congress-TDP alliance. In Chhattisgarh Congress came out victorious but in Madhya Pradesh and Rajasthan it was a very close call. There is little for Congress to draw solace from these results as it could not create an anti-incumbency wave like situation even after 15 year long BJP government in Madhya Pradesh. It appeared during the counting of votes that the results could have swung either side and in the final outcome congress could not secure full majority on its own. The elections also saw extremely close contest in terms of vote percentage in Madhya Pradesh and Rajasthan. No one will deny the fact that these elections were dominated by local issues having repercussions in some selected pockets of these states. The BJP government in these states have led them strongly on the path of rapid growth and development and now in opposition BJP leadership will have to ensure that these states continue to tread on the path of good governance and development.

The task before the nation is huge. The BJP was given massive mandate by the people under the leadership of Prime Minister Shri Narendra Modi in 2014. The country was facing declining economic growth, policy paralysis, misgovernance, massive corruption and loot of public money under Congress led UPA rule. There was negativism in the atmosphere and India’s image in the international forums had taken a beating. Under such circumstances people of India elected Shri Narendra Modi as prime minister of the country. The Prime Minister Narendra Modi has taken the country to new heights and earned respect for India on almost every international forum. India’s performance on almost every parameter of good governance and development is now being acknowledged by all international rating agencies and experts. The country has become fastest growing major economy in the world and become sixth largest economy in the world improving its ranking from ninth. India’s economic credibility has not only been restored but the world is looking at India with hope and expectations. The work for poor, farmers, Dalits, Tribals, OBCs, youth and women is transforming the rural landscape and bringing massive change in the lives of the people. The BJP karykartas are working day and night to take government programmes to the people. The nation is witnessing huge transformation and in such a time the opposition is trying to create false issue to mislead the people. It is time that BJP Karyakrtas move ahead with confidence to serve the people with full commitment and vigour. Only honest and rigorous work for the poorest of the poor of the country will be a real answer to the opposition’s propaganda and false issues. Let BJP karyakartas move with resolve and dedicate oneself in the service of Maa Bharati.