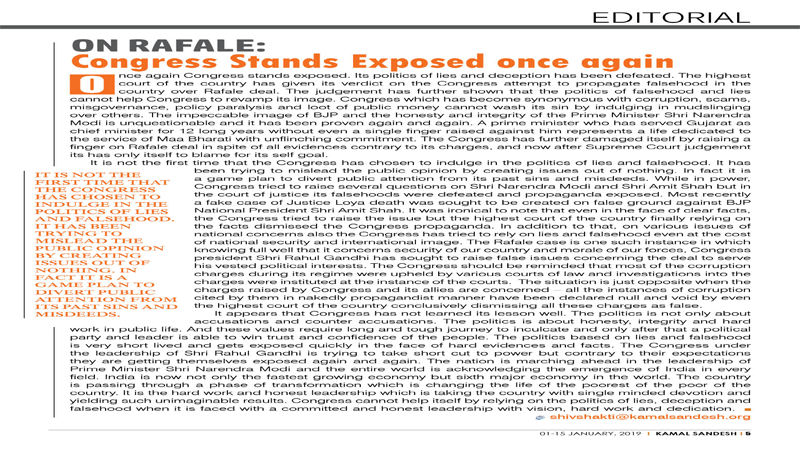 Once again Congress stands exposed. Its politics of lies and deception has been defeated. The highest court of the country has given its verdict on the Congress attempt to propagate falsehood in the country over Rafale deal. The judgement has further shown that the politics of falsehood and lies cannot help Congress to revamp its image. Congress which has become synonymous with corruption, scams, misgovernance, policy paralysis and loot of public money cannot wash its sin by indulging in mudslinging over others. The impeccable image of BJP and the honesty and integrity of the Prime Minister Shri Narendra Modi is unquestionable and it has been proven again and again. A prime minister who has served Gujarat as chief minister for 12 long years without even a single finger raised against him represents a life dedicated to the service of Maa Bharati with unflinching commitment. The Congress has further damaged itself by raising a finger on Rafale deal in spite of all evidences contrary to its charges, and now after Supreme Court judgement its has only itself to blame for its self goal.

It is not the first time that the Congress has chosen to indulge in the politics of lies and falsehood. It has been trying to mislead the public opinion by creating issues out of nothing. In fact it is a game plan to divert public attention from its past sins and misdeeds. While in power, Congress tried to raise several questions on Shri Narendra Modi and Shri Amit Shah but in the court of justice its falsehoods were defeated and propaganda exposed. Most recently a fake case of Justice Loya death was sought to be created on false ground against BJP National President Shri Amit Shah. It was ironical to note that even in the face of clear facts, the Congress tried to raise the issue but the highest court of the country finally relying on the facts dismissed the Congress propaganda. In addition to that, on various issues of national concerns also the Congress has tried to rely on lies and falsehood even at the cost of national security and international image. The Rafale case is one such instance in which knowing full well that it concerns security of our country and morale of our forces, Congress president Shri Rahul Gandhi has sought to raise false issues concerning the deal to serve his vested political interests. The Congress should be reminded that most of the corruption charges during its regime were upheld by various courts of law and investigations into the charges were instituted at the instance of the courts. The situation is just opposite when the charges raised by Congress and its allies are concerned – all the instances of corruption cited by them in nakedly propagandist manner have been declared null and void by even the highest court of the country conclusively dismissing all these charges as false.

It appears that Congress has not learned its lesson well. The politics is not only about accusations and counter accusations. The politics is about honesty, integrity and hard work in public life. And these values require long and tough journey to inculcate and only after that a political party and leader is able to win trust and confidence of the people. The politics based on lies and falsehood is very short lived and gets exposed quickly in the face of hard evidences and facts. The Congress under the leadership of Shri Rahul Gandhi is trying to take short cut to power but contrary to their expectations they are getting themselves exposed again and again. The nation is marching ahead in the leadership of Prime Minister Shri Narendra Modi and the entire world is acknowledging the emergence of India in every field. India is now not only the fastest growing economy but sixth major economy in the world. The country is passing through a phase of transformation which is changing the life of the poorest of the poor of the country. It is the hard work and honest leadership which is taking the country with single minded devotion and yielding such unimaginable results. Congress cannot help itself by relying on the politics of lies, deception and falsehood when it is faced with a committed and honest leadership with vision, hard work and dedication.