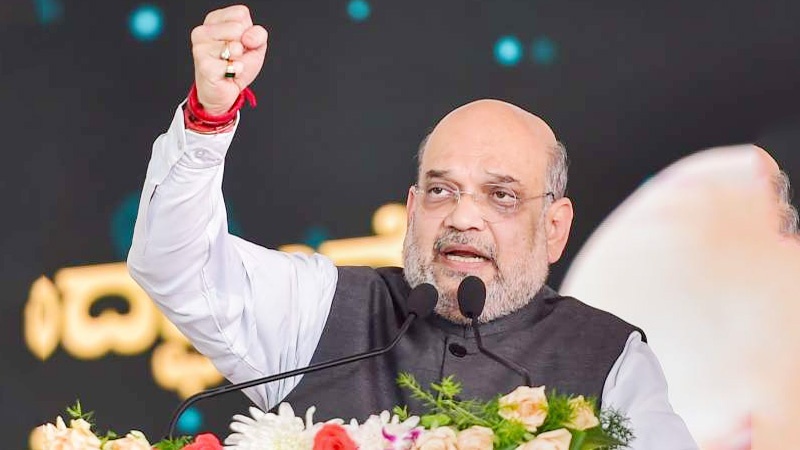 On a two-day visit to West Bengal, Union Home Minister Shri Amit Shah arrived in Kolkata on 05 May, 2022 and participated in several events, including a huge public meeting in Siliguri, the foundation stone laying ceremony of Maitri Museum and Prahari Sammelan at Haridaspur. Shri Shah also attended a cultural event-Mukti-Matrika at Kolkata, organised by the ministry of culture to celebrate the inscription of the Durga Puja in the UNESCO list of ‘Intangible Cultural Heritage’ and met the MPs, MLAs and state office-bearers of the West Bengal BJP.

Addressing a massive public rally in North Bengal’s Siliguri, Union Home Minister Shri Amit Shah said, the Citizenship Amendment Act (CAA) will be implemented once the Covid-19 situation is over. “Mamata Didi only wants to see infiltration into Bengal but our refugees do not get citizenship. The Trinamool must listen to this clearly, the CAA was a reality, is a reality and will remain a reality”, Shri Shah said.
The Union Home Minister accused the ruling TMC in Bengal of spreading canards about the Citizenship (Amendment) Act, and said that the law would be implemented once the Covid-19 pandemic ended.

BJP would not rest till it uprooted the tyrannical rule of the TMC and restored democracy in Bengal, he said. Shri Shah also added that BJP was determined to fight against the ‘cut-money’ culture of extortion, corruption and political violence.
He said, “I want to thank the people of Bengal for raising BJP’s tally in the Assembly to 77 from three. We had hoped that Mamata Didi would rectify herself after being voted to power for the third time. We waited for an entire year for her to rectify herself, but she didn’t change. Jungle Raj still prevails in the state,” Shri Shah stated.
“Didi has always misled Gorkha brothers and sisters. I have come today to tell them that if there is one party that thinks in the interest of Gorkhas, it is the BJP and a permanent political solution to all problems will be found within the limits of the Constitution,” he added.

Union Home Minister Shri Amit Shah paid tributes to social reformer Thakur Panchanan Burma in Siliguri. He said, “Thakur Panchanan Burma was a great leader and social reformer who dedicated his entire life for the empowerment of the backward people of the society. He was one of the foremost personalities of our Rajbangshi community, today I pay my respects to this great soul in Siliguri ”.
The Union Home Minister, during his visit to West Bengal also paid respect and homage to Tenzing Norgay Sherpa of Darjeeling, the first man to reach the summit of Mount Everest. Later in his message Shri Shah said, ” On the day of May 29, 1953 a new history was made when Tenzing Norgay Sherpa of Darjeeling became the first man to reach the summit of Mount Everest with Sir Edmund Hillary of New Zealand. He is the source of inspiration for all of us. I offer my heartfelt respect and homage to him,” he tweeted.

Union Home Minister Shri Amit Shah on 06 May, 2022 said 25 years from now, India will occupy the top position globally. Addressing a function at the Victoria Memorial in Kolkata to commemorate the 75th year of Independence and the UNESCO declaration of Bengal’s Durga Puja as an intangible global heritage, Shri Shah said the global body’s honour was a matter of pride for the entire country. In every sector – education, arts, defence, you name it, India has made great strides. It has gained respect internationally as a great power. When the country reaches its 100th year of Independence, India will occupy the top position in the world.
Speaking on the issue of UNESCO’s honour for Bengal’s Durga Puja, he said, “it is not only a matter of pride for the state, but for the entire country.”

Shri Shah said, “Durga puja is celebrated for worshipping the goddess. Worshipping the ‘Stree Shakti’ is for women’s empowerment. She is one power whom all the Gods- the Hindu trinity– Brahma, Vishnu, Maheshwar invoked to slay the demon. India has shown the world how to celebrate women’s power for ages.
The Home Minister also paid glowing tribute to the freedom fighters who have made it possible for us to breathe in a country freed by their sacrifices. He referred to revolutionaries like Khudiram Bose from Bengal in this context. 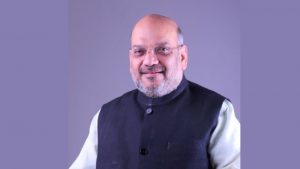 The BJP unit in West Bengal said Shri Chowrasia, who was Bharatiya Janata Yuva Morcha Mondal Vice-President of North Kolkata was brutally murdered and hanged. The 27-year-old party worker was found dead under mysterious circumstances on the morning hours of 06 May.

Following the mysterious death of the party worker, Union Home Minister Shri Amit Shah cancelled all welcome events planned for him in the city and visited his residence. After meeting his family, Shri Shah said, “We will ensure that those behind the murder of BJYM leader Arjun Chowrasia are punished.”

The Bharatiya Janata Party has emerged as the single-largest party in the 25-member Mara Autonomous District Council (MADC) polls in south Mizoram’s Siaha district. The party has won 12 seats and emerged as the largest party. The MADC polls results were declared on 09 May, 2022.