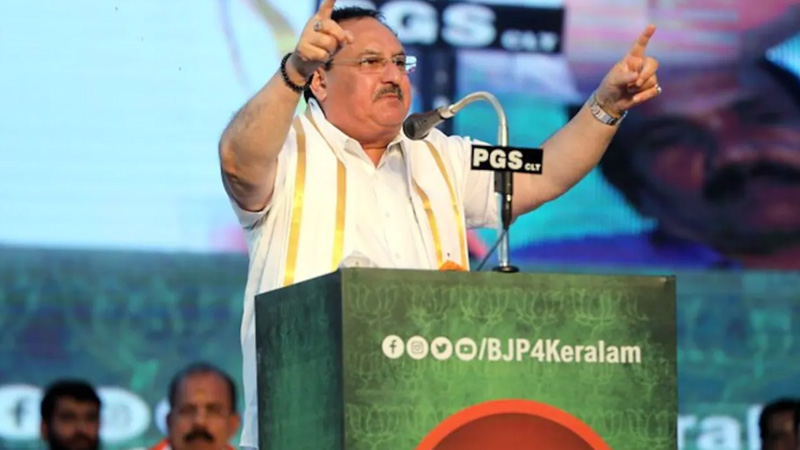 BJP National President Shri Jagat Prakash Nadda while addressing a massive public rally in Kozhikode, Kerala on 06 May, 2022 said the enthusiasm of the people shows that in the coming days the Bharatiya Janata Party has a very bright future and will emerge as a strong force in Kerala.

In Kerala, society at large is in discomfort and disturbed because of the fast demographic changes taking place in the state. Religious leaders especially from the Christian community have been raising such issues time and again, he said.

The BJP National President said the lawlessness of Kerala under the LDF regime is exposed by the high presence of organized crime and the mind-boggling number of murders that have taken place in the state over the past three years. Unfortunately, this is the type of governance the LDF is promoting in Kerala. He said the Pinarayi Vijayan government has completely failed in every aspect of governance.
Atrocities against women increased significantly.

WE WILL CONTINUE OUR FIGHT IN A DEMOCRATIC MANNER

The latest incident of the brutal attack on RSS workers Shri Srinivasan and Shri A. Sanjit in Palakkad is a glaring example of support given by the state government to criminal and communal elements. The BJP National President said, “I salute the BJP karyakartas of Kerala who are fighting the state sponsored violence. I would like to say that in a democratic manner, we will continue our fight and we will bring the culprits to books”.


–India is now the world’s largest startup ecosystem where 68,000 startups are working.

–Within one year 100 Unicorns have been created.

–Because of the encouragement of PM Shri Narendra Modi, in 2021-22 India did very well in the Khadi sector and it has empowered our artisans, workers and farmers.

–We have introduced the ‘One Nation, One Ration Card’ scheme which is one of the greatest reforms which has been done for people and the labour class.

–Under the leadership of PM Shri Narendra Modi Article 370 and 35A has been revoked and now Jammu Kashmir is our integral part.

–Jammu and Kashmir is today moving fast on the path of development, growth and prosperity.

–Under PM Kisan Samman Nidhi, 11 crore farmers have received funds of which 37.31 lakh farmers are from Kerala.

–More than 12 crore households in the country are getting tap water connection, out of which 70.68 lakh beneficiaries are from Kerala under Jal Jivan Mission.

–Under the financial inclusion scheme 45 crore people have been included in Jan Dhan Yojana, out of which 45.85 lakh people belong to Kerala.

–Petrochemical project of BPCL worth Rs 6,000 crores has been allocated to Kerala.
The Marine Engineering training institute ‘Vigyan Sagar’, the Cochin Shipyard Limited and many other projects are coming up in Kerala.

–Under Bharatmala Pariyojana, so far 16 projects have been completed, 49 projects are under-construction and Rs 4,035 crores has been allocated to Kerala.

–Under Sagarmala project, 65 projects are going on and Rs 18,081 crore has been spent on it.