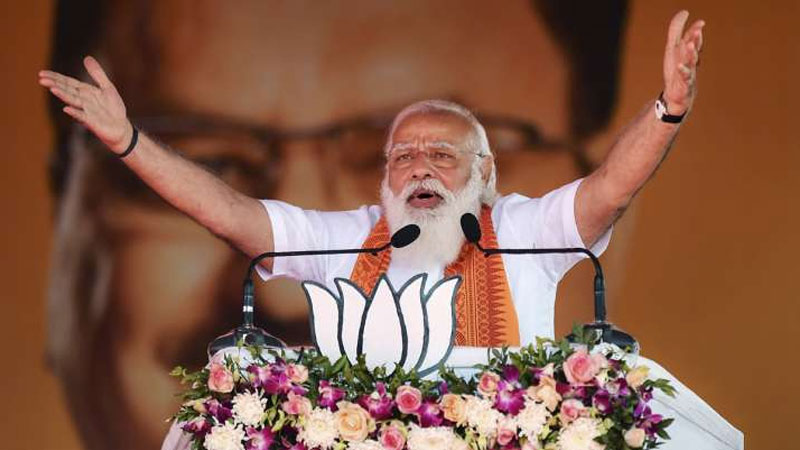 PM Shri Narendra Modi on 06 April, 2021 addressed two massive rallies in Cooch Behar and Howrah in West Bengal. He said, “Today I have come to Cooch Behar on such an occasion when BJP is celebrating its ‘Sthapna Diwas’. This land of Bengal has given thoughts, values, inspiration and continuous energy to the BJP. In the last two phases of voting, TMC and Mamata Didi’s exit has already been confirmed. People in huge numbers have come out and voted in our favour. The wave of BJP in Bengal has cornered Didi’s goons and her nephew.” 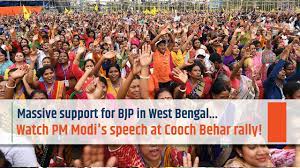 ‘A CHILD CAN ALSO TELL THAT TMC HAS LOST THE ELECTION’

PM Shri Modi slammed TMC supremo Mamata Banerjee, who has been asking “Is BJP God that it already knows it is winning polls?” the PM replied, “I want to say to her that we’re normal people engaged in the service of public. I want to tell the people that I will return your love with interest in the form of development.”
“Didi, seeing your anger, your resentment, your behavior, your speech, a child can also tell that you have lost the election. Didi, the day you did ‘khela’ at the polling booth in Nandigram, the same day the country knew that you have lost the elections. The Election Commission which made you the Chief Minister twice by conducting elections, today you are having problems with that Election Commission itself. It shows that you have lost the election,” he added further.

Lashing out at Mamata Banerjee on her vote bank politics, the Prime Minister said, “Recently, Didi said that every Muslim must get together and not allow their votes to be divided. Didi, it means you know that the Muslim vote bank, that you considered your strength, is also slipping away from you. It shows that you have lost the poll.”
In Cooch Behar rally, the PM said, “Recently, the tapes that have been revealed gives Didi’s report card of 10 years. Didi has started a new tax in Bengal – ‘Bhaipo Service Tax’. Poor mother-sister, who keep adding rupees from their hard work use to go in Bhaipo Service Tax.”

Slamming Mamata Didi on her mis-governance, PM Shri Modi asserted, “For 10 years, women, Dalits, backward classes and tea workers were subjected to injustices, Didi kept watching. For 10 years, farmers were deprived of irrigation and storage facilities but Didi, you were just an onlooker. Didi, people say you play a lot of football. You’ve already scored an own goal in football of politics.”

‘DIDI’S PARTY IS NOT GETTING POLLING AGENTS AT POLLING BOOTH’

Speaking at Howrah rally, Prime Minister Shri Narendra Modi said, “Not only Bengal and Nandigram, but Nandi is also openly expressing her displeasure with Didi. The situation has come that Didi’s party is not getting polling agents at the polling booth today. Few days back, she was accusing EC and security forces of stopping her polling agent. Now she has accepted that her polling agents are revolting against her.”

“The truth of whatever Didi did to West Bengal has come out. This is why Didi is threatening people of West Bengal. Didi says ‘AMRA DEKHE NEBO’, BJP says ‘AMRA SEVA KORBO’. We are humbly asking for a chance to serve people,” said Shri Narendra Modi in Howrah.

He further contended that TMC government is unable to give Bengal peace and growth, he remarked, “Didi’s government’s mis-governance gave Ease of Crime, Ease of Loot to West Bengal, the BJP government is going to provide the ‘Ashol Poriborton’ of Ease of Living and Ease of Doing Business. The PM asked the people of Bengal to vote in large numbers in favour of the BJP in upcoming elections.

• Didi, people say you play a lot of football. You’ve already scored an own goal in football of politics.
• Didi, the day you did ‘khela’ at the polling booth in Nandigram, the same day the country knew that you have lost the elections.
• I want to tell the people that I’ll return your love with interest in the form of development.
• Sonar Bangla will be built by good behavior and a clean conscience, and with the right policy.
• Didi’s government’s mis-governance gave Ease of Crime, Ease of Loot to West Bengal.
• BJP government is going to provide the ‘Ashol Poriborton’ of Ease of Living and Ease of Doing Business.