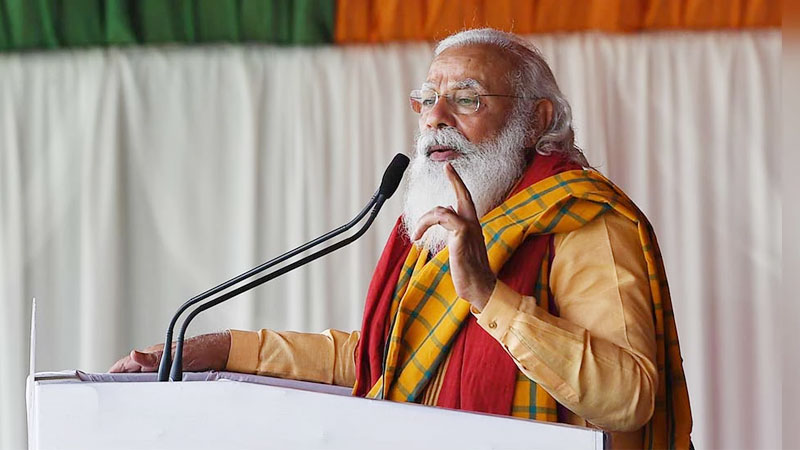 Addressing a huge election rally at Tamulpur in Assam on April 03, 2021 Prime Minister Shri Narendra Modi said, “People of Assam have decided ‘Phir ek baar, NDA sarkar’. The people of Assam will not tolerate them who have insulted Assam’s identity repeatedly, who have established violence and instability in Assam for decades. The people of Assam are with development and peace.”

“The double-engine government of NDA has given double benefits to the people of Assam in the last five years. The development taking place is improving connectivity, making lives easier for women and increasing opportunities for the youth,” he said.
Attacking the grand alliance of Congress and AIUDF, the Prime Minister asserted, “The games of secularism-communalism have done a lot of damage to the country. We are working hard, day in and out to serve the society with honesty for development.” PM Shri Modi further added, “The ‘Mahajhooth’ of ‘Mahajot’ has been disclosed. On the basis of my political experience, and audience love, I can say that people have decided to form NDA government in Assam. They can’t bear those who insult Assam’s identity and propagate violence.”

Shri Modi said, “The way we have solved long-standing problems, we will continue to find solutions for the current problems. There’s a lot of scope for tourism and employment in Assam”.

The PM said that NDA Government had always worked without discrimination. He remarked, “It is country’s misfortune that working for a particular section is called secularism while working for everyone gets you called communal.”
The Prime Minister urged everyone especially the youth to vote in large numbers in favor of the NDA. He also thanked women from the state who turned out in record numbers in the rallies.