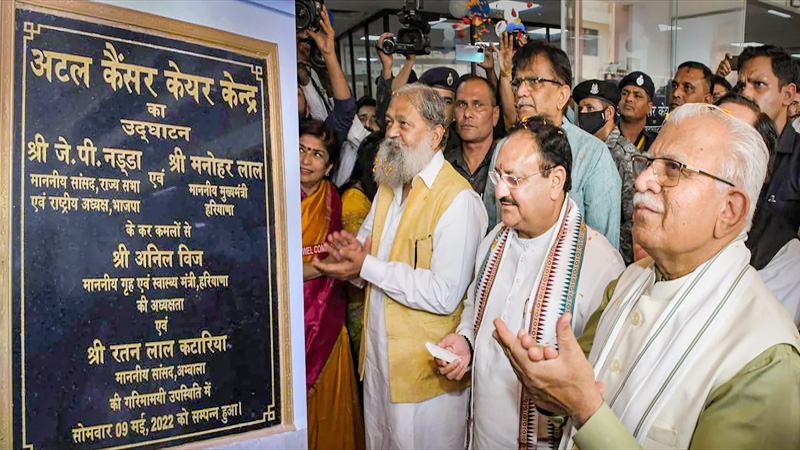 Addressing on the occasion Shri Nadda said one of North India’s biggest cancer treatment and care centre has been dedicated to the people today in Ambala in Haryana. For this great work I congratulate and thank Haryana Chief Minister Shri Manohar Lal Khattar and Health Minister Shri Anil Vij.

He said under the leadership of Prime Minister Shri Narendra Modi the BJP government is the only government that takes care of all sections of the society, specially poorest of the poor and oppressed and backward classes. Shri Modi has already sanctioned AIIMS for Haryana. Land for construction of AIIMS in Haryana has already been made available. Very soon the Prime Minister will lay the foundation stone of AIIMS at Manethi in the state.

He said the BJP governments at the Centre and in the state are highly committed for the growth and development of Haryana. India’s largest cancer treatment and care centre with 710 beds has been established in Jhajjar in Haryana at a cost of Rs 2,000 crores.

The BJP government in Haryana has announced to give Rs. 2500 per month financial assistance to cancer patients in the state apart from the facility of free travel in state buses to them. All these are highly commendable initiatives of the Manohar Lal Khattar government in Haryana, Shri Nadda said.

The BJP National President said under the ‘Affordable Medicines and Reliable Implants for Treatment (AMRIT) scheme a discount of 50% is being given on use of medical equipment. There are as many as 225 such centers across the country which are currently functioning which have benefited around 2.93 crore patients. Under this scheme patients have been provided medicines worth Rs 4512 crores on discounted rates at Rs 2,324 crores.

Speaking on the occasion, the Chief Minister Shri Manohar Lal Khattar said that this centre will help provide accessible, affordable treatment to cancer patients from north India. The CM also announced Rs. 2,500 as a monthly pension to the patients with Stage 3 and 4 cancer and financially-challenged patients suffering from Thalassaemia and Haemophilia. The government is already providing similar aid to AIDS patients, he said.