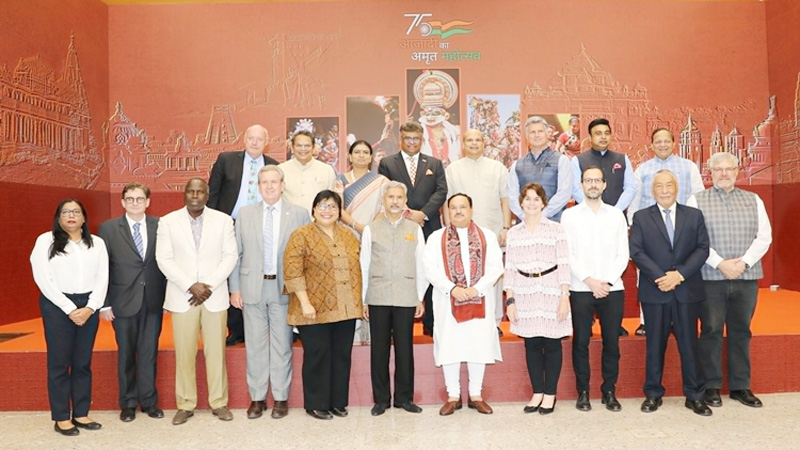 Noteworthy, on the Foundation Day of BJP, Party National President Shri Jagat Prakash Nadda launched the new initiative “Know BJP” specifically to address overseas audiences and interacted with Head of Missions of 13 countries of the World.

Under the “Know BJP” initiative, the party presented detailed information on its historical journey, ideology, structure and ongoing activities. During this event, Shri Nadda elaborated on the history, struggles, successes, ideology and contribution of the Bharatiya Janata Party and BJP governments in nation building. Key points of the interaction of the National President with the ‘Head of Missions’:

–Most of the diplomats spoke to the BJP National President regarding people-to-people & party-to-party relationship, cultural interaction between countries and contacts and exchange of ideas between political parties of their respective countries. While agreeing to implement these suggestions, Shri Nadda said that such programs would be prepared in the near future.

–It gives me immense pleasure to welcome the ‘Heads of Missions’ from 14 countries in the second phase of the “Know BJP” program at the central office of the world’s largest political party, BJP, on the auspicious occasion of Buddha Purnima. I extend my best wishes to you all on this auspicious occasion.

–The way Prime Minister Shri Narendra Modi has established connections with three crore Indians living abroad and encouraged them, it is incomparable. Today, be it citizens of India in any part of the world, they have full faith that if they have any problem Prime Minister Shri Narendra Modi is with them, the Government of India is with them. If Modi is there, then nothing is impossible.

–Wherever Indian citizens are living in any part of the World, they have adopted the local cultural values while preserving their cultural values and have played an important role in making that country prosperous.

–Under the leadership of Shri Narendra Modi, we are committed to build an India where everyone is treated equally across all the religion, caste, creed and religion. Equal opportunities are provided to every citized without any discrimination.

–PM Modi is working tirelessly for last 20 years to uplift and empower the marginalized section of the society including Dalit, Tribal, Minorites, Backward & Women.

–Despite the COVID pandemic, India has managed to keep the rate of extreme poverty below 1%. According to the World Bank report, poverty in India has decreased by about 12.3% in the last 8 years under the able leadership of PM Shri Modi.

–Cultural Nationalism, Integral Humanism and Antyodaya are the ideological basis of BJP. Bharatiya Janata Party has deep faith in constitutional and democratic values.

–Under the leadership of Prime Minister Shri Narendra Modi, about 23,000 Indian students from war-torn Ukraine returned home safely under ‘Operation Ganga’. During this, BJP workers contacted the families of the students thrice and gave them confidence of the safe returns.