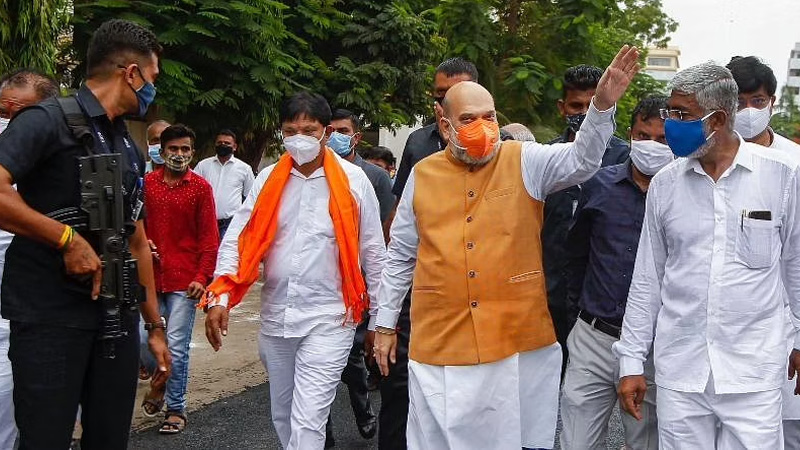 Union Home and Co-operation minister Shri Amit Shah visited Ahmedabad, Gujarat on 12 June, 2022 and hailed the development work started in Gujarat after PM Shri Narendra Modi had become Chief Minister of the state. He also laid the foundation stone of projects worth hundreds of crores in Ahmedabad and surrounding areas.

Addressing a huge gathering in Bopal area of Ahmedabad Shri Amit Shah said, “After so much experience in politics, I have seen many type of leaders. There are some who just allow things to happen at their pace and go to cut the ribbon. There are such leaders also who work hard to ensure best development takes place during their tenure. But there are some others, probably Shri Narendra Modi is the first such leader, who built a mechanism so that development continues for decades and decades.”

He said Gujarat has benefited a lot from the 14-year rule of Shri Narendra Modi as the Chief Minister. “Systems and arrangements were made in those 14 years which ensure development work takes place even after he left Gujarat”.

The Union Minister inaugurated a civic centre, a reading centre with a capacity of over 150 students in Bopal area, supply of drinking water to Ghuma, a community hall, party plot and various other projects. He also inaugurated some projects of the Western Railway for redevelopment and increasing facilities at stations in the western part of Ahmedabad.

“It is my endeavour to ensure the development of the Gandhinagar Lok Sabha area and I thank all officials who have worked for the completion of these projects,” Shri Shah said.

Shri Shah said under the leadership of PM Shri Modiji, BJP governments are giving new impetus to development by strengthening the infrastructure of the Gandhinagar parliamentary constituency. He added that Gandhinagar, in terms of development, will turn out to be the best constituency in the country by 2024.