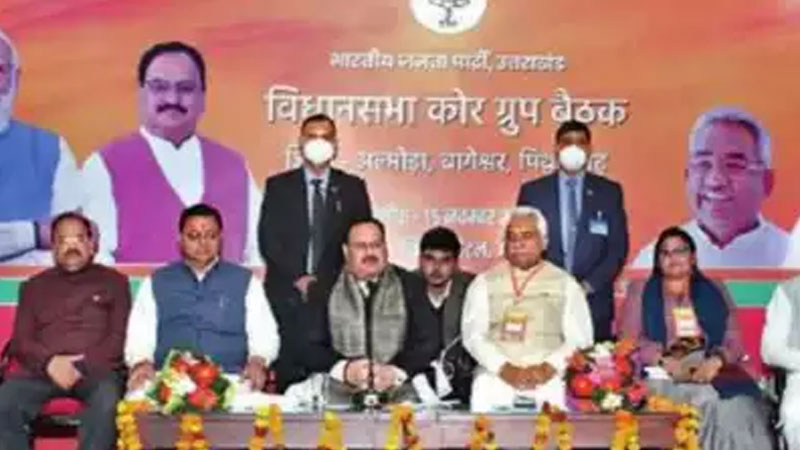 BJP National President Shri JP Nadda visited Uttarakhand on 15 November, 2021 to review the party’s preparations ahead of the 2022 state assembly elections. After reaching the state capital Dehradun Shri Nadda went straight to Chamoli where he participated in ‘Shaheed Samman Yatra’ and several organisational meetings. The BJP President also attended numerous organisational meetings during his two days Pravas to the state.

under the ‘Shaheed Samman Yatra’, soil from the houses of over 1,734 soldiers will be collected to build ‘Sainya Dham’ in Dehradun. The Yatra will continue till December 07 and pass through 70 blocks in 13 districts of Uttarakhand….

Addressing at the ‘Shaheed Samman Yatra’ and launching a scathing attack on the opposition Congress party, Shri JP Nadda said, “Congress did not do anything for Army personnel till 2014. Wherever there is Congress, there is commission. Where there is NDA and BJP, there is a mission.” He urged everyone to pay respects to soldiers and their families.

The BJP National President said that under the ‘Shaheed Samman Yatra’, soil from the houses of over 1,734 soldiers will be collected to build ‘Sainya Dham’ in Dehradun. The Yatra will continue till December 07 and pass through 70 blocks in 13 districts of Uttarakhand.

Speaking on the occasion, he said the soil from the aangan of soldiers would be collected from November 15 to December 7. The BJP President explained that this would be used in Dehradun for ‘Sainya Dham’.

While reviewing BJP’s preparations and highlighting the state and central government’s work in the 12 assembly seats, Shri Nadda told party cadres to focus at the booth level and reach out to maximum number of voters. He said that the role of women and youth will be crucial in the Uttarakhand polls.

Besides taking part in an interaction programme with ‘Bengali Samaj’ the BJP National President also participated in several organisational meets at Rudrapur on 16 November, 2021. He reviewed in a meeting with in-charges of 70 assembly seats and ‘vistaraks’ during his visit to Rudrapur.

BJP National President Shri JP Nadda met with Subhash Chhabra, the Former President of the District Bar Association who was imprisoned during the Emergency and at his home met with other freedom fighters in Rudrapur, Uttarakhand. He along with Chief Minister Shri Pushkar Singh Dhami and State BJP President Shri Madan Kaushik also paid floral tributes to freedom fighter Udham Singh in Rudrapur.