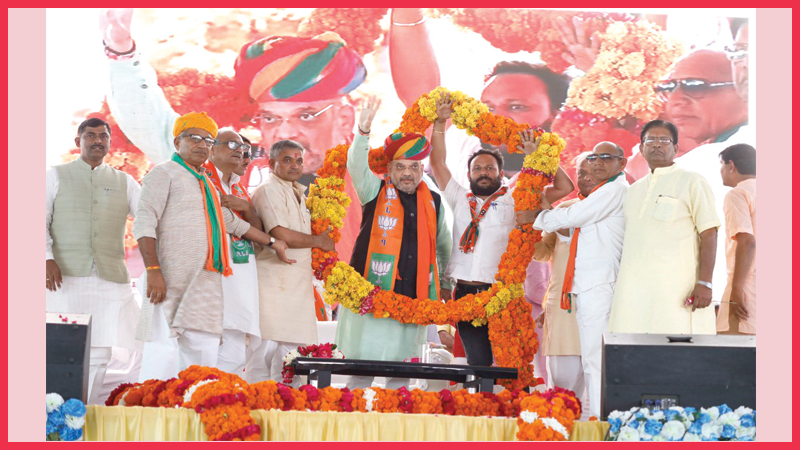 BJP National President Shri Amit Shah, on a three-day visit to poll-bound Rajasthan, on 16 September, 2018 said that the BJP is not a party of any single caste or community. Addressing an OBC rally in Pali, Shri Shah said that all “36 qaum” — referring to a common local usage to imply unity among castes and communities — had come to hear him.

Mentioning the party’s OBC Morcha State President Shri Omprakash Badhana, he said, “He met me and said our party has given representation to all communities in governance. When I said it can’t be, he gave me a list of all communities (which have been represented in the Rajasthan government).”

Shri Shah then read out names of 36 communities, including Dhakhad, Dhobi, Yadav, Ghanchi, Khatri, Baghel, Banjara, Kumar, Kumawat, Mali and Sirvi among others, and said, “The BJP is not a party of a single caste or community… the BJP has never had a stamp of any single community.”

He said the Kaka Kalelkar Commission had recommended in 1955 constitution of an OBC Commission, that it be granted a constitutional status and that “all backward communities be extended constitutional dignity by the government”.
“The report came in 1955 and several Congress governments came and went. Rahul Baba, unki chaar peerhi ne shashan kiya (his four generations ruled the country) but the OBCs did not get justice,” he said, adding that they got justice only after the Narendra Modi government came to power at the Centre.

“A lot of people come from Pakistan to Rajasthan… mistreated Hindus run away from Pakistan, should they be granted asylum or not?” he said. “All Hindu and Sikh brothers who have escaped from Pakistan, Afghanistan and Bangladesh, the Narendra Modi government will give them citizenship,” he added.

He said the “Congress is opposing Modiji for expelling intruders” but “they take away jobs, grain, and security.”