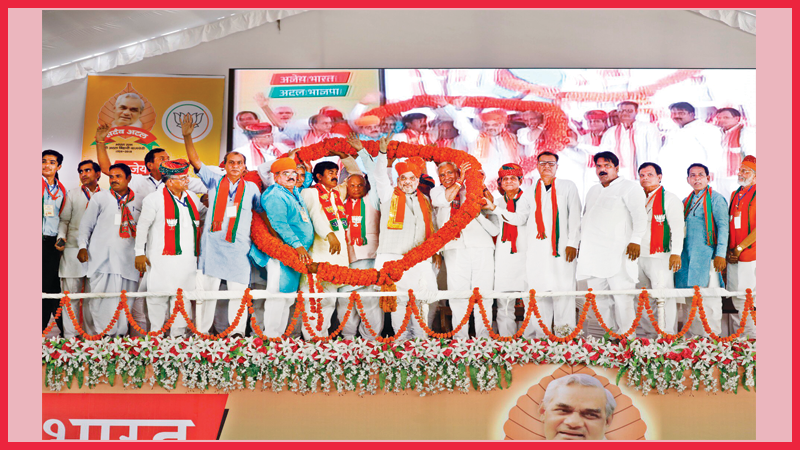 BJP National President Shri Amit Shah highlighted the efforts of BJP governments at the Centre and in Rajasthan to improve returns from agriculture as he addressed farmers in Nagaur in the poll-bound state on 18 September, 2018 and reiterated the Modi government’s commitment of doubling farmers’ income by 2022.

Shri Shah also paid tributes to Mira Bai, Tejaji Maharaj and Amar Singh Rathore at the beginning of his address and called Rajasthan as “Great Rajasthan”.

On a three-day Pravas to the State, Shri Shah appealed to the farmers to vote for the Chief Minister Smt. Vasundhara Raje and Prime Minister Shri Narendra Modi while addressing a farmers’ meeting.

“Me and my party owe a debt to Rajasthan. The people of Rajasthan helped the BJP sweep 2014 Lok Sabha polls by electing party’s candidates from all 25 seats. This gave absolute majority of BJP government under the leadership of Prime Minister Narendra Modi at the Centre. If there were no MPs from Rajasthan, then there would have been a weak government and such governments do not work,” Shri Shah said, thanking the people of the state for giving all Lok Sabha seats to BJP.

He also requested them to vote for the party in upcoming assembly and Lok Sabha polls, “I thank you for this. In the upcoming Lok Sabha and assembly elections, you all give support and help BJP to form governments in the state and at the Centre,” the BJP President said.

‘Kisan Samrudh to Desh Samrudh’, the BJP President told the gathering in the district, which is considered the heartland of farming in the state and said that the Centre had given a major impetus to agriculture. The BJP government, he said, believes in the policy of free trade and free agriculture.

“At the time of UPA government the annual growth rate of agriculture in the country was -2%. But with the right intervention of Modi government, agriculture is now growing at 4%,” said Shri Shah. BJP-ruled states, he said, fared even better in agriculture. “In Rajasthan, it’s growing at 15%, in Gujarat 10% and in Madhya Pradesh, it is 18%. Earnings of farmers have also increased 10% in states where there is BJP government,” he said.

He said the Modi government had doubled the budget for agriculture and fixed the minimum support price (MSP) at 1.5 times the cost of production. “Now farmers will reap benefits in both kharif and rabi seasons. The MSPs of cotton, bajra and pulses have been increased tremendously. Farmers had been demanding a raise in MSP but UPA government was never bothered about the plight of farmers,” he said.

The BJP President said the Rajasthan government had introduced innovative farming by way of producing palm and olive in the state. “Who can think of having palm trees and olive plantations in Rajasthan? Our government has set up an olive oil refinery also in the state to benefit farmers,” he said.

Shri Amit Shah said, the BJP government in Rajasthan had waived farm loans of up to Rs 50,000 to bring relief to stressed farmers.