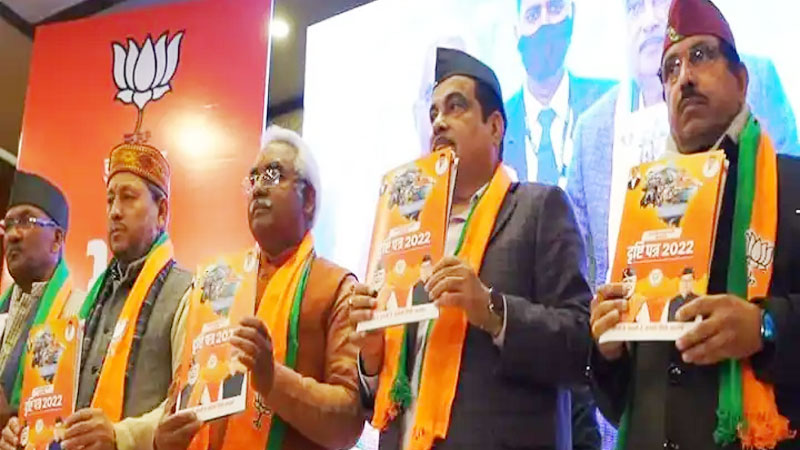 The Bharatiya Janata Party has released its ‘Drishti Patra’ for the Uttarakhand state assembly elections on 9 February, 2022. Speaking on the occasion, Union Minister Shri Nitin Gadkari said the party is in touch with Uttarakhand people’s aspirations and this manifesto is based on the suggestions received from the voters of all the constituencies the state.

Shri Gadkari said, “Not a single section of the society has been left out of the vision document, which has been tailored according to the vision of Bharat Ratna Atal Bihari Vajpayee, who created this state, and Prime Minister Shri Narendra Modi, who is relentlessly trying to develop this hill state”. Key highlights of the ‘Drishti Patra’:

• The BJP Government in Uttrakhand, on the lines of PM Kisan Samman Nidhi Yojana, will institute a “CM Kisan Protsahan Nidhi” under which an additional sum of Rs. 2,000 will be given over and above the Rs. 6,000 given through the PM Kisan Samman Nidhi, to encourage them to increase productivity.
• Constitute a corpus fund of Rs. 500 crores for the establishment of Dairy Cooperatives in every block.
• Create a fund of Rs.1,000 crore to invest in building 50 state-of-the-art agricultural warehousing and cold storage facilities.

• To enable ‘Atma Nirbharta’ of Uttarakhand’s women, the BJP government will launch a scheme to provide 3 free LPG cylinders in a year to the women of poor households of the state.
• Establish a special Rs. 500 crore fund to aid business initiatives of women self-help groups.

• The BJP Government will work with the aim of providing Uttarakhand with truly world class infrastructure. It will initiate the “Parvat Mala Project”.
• Launch “Mission Himavant” to minimize losses to lives from annual landslides.

• The BJP Government, will provide a stipend of Rs. 3,000 under a newly created “Chief Minister’s Apprenticeships for Uttarakhand Youth Scheme” to any willing unemployed youth for a period of one year. This will be in addition to the stipend provided by the central government.

• The BJP Government, to provide unorganized laborers and the poor of Uttarakhand with a pension of upto Rs. 6,000 and an insurance cover of Rs.5 lakhs.

• Will strengthen and amend the law against ‘Love Jihad’.
• The BJP Government will institute a task force to implement a policy of “Zero Tolerance of Drugs”.