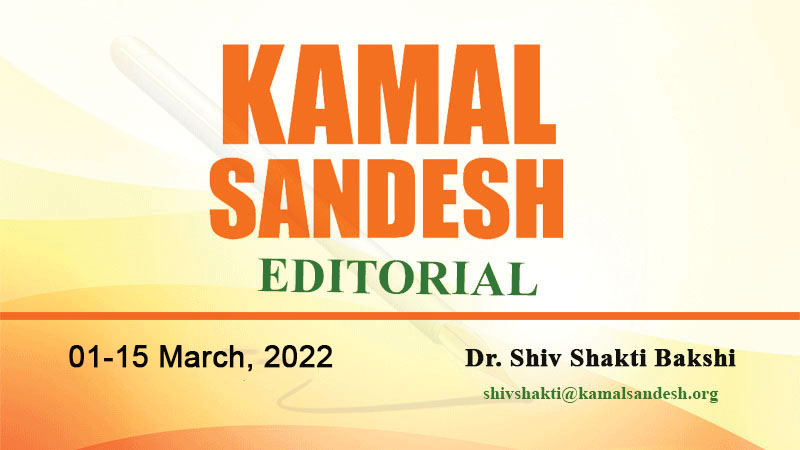 As the campaign for assembly elections is gaining momentum with every passing day in Uttar Pradesh and Manipur, the polling has been completed in the states of Uttarakhand, Goa and Punjab. The massive people’s participation in public meetings, rallies, road shows, and finally on polling day shows the strength of Indian democracy, its beauty, vibrancy, and vigour. While around 62% of people voted in Uttarakhand, around 80% exercised their franchise in Goa and 72% in Punjab. In Uttar Pradesh, people are coming out in large numbers and more than 60% of voting has been recorded in different phases where polling has been completed. The boundless enthusiasm and huge participation in BJP public meetings, rallies, and road shows clearly show the preference of the voters in these elections. The BJP clearly stands out as the party that believes in performance, development, good governance, and the welfare of the poor, farmers, labourers, women, and youth. The result is that the party is getting immense support from every section of society.

In the run-up to the assembly elections, the BJP has released its ‘Sankalpa Patras’ for all five states where elections are taking place. These ‘Sankalp Patras’ present not only the vision of the party regarding different states but also reflect the aspirations of the people. It is to be noted that the process of drafting these ‘Sankalp Patras’ included an important component wherein the participation of people in the preparation of these visionary documents was ensured. The ‘Sankalpa Patras’ not only present the roadmap of these states in accordance with the BJP vision but also the commitment of the BJP karyakartas to transform these states into power houses for national development. The poor, farmer, labourer, women, and youth centric ‘Sankalpa Patras’ include several innovative ideas which are prepared in accordance with the state-specific needs while tapping their potential with a grand vision for good governance, development, and progress of these five states.

The ‘Sankalp Patras’ released for all these five states focuses on taking welfare measures to a new trajectory by assuring an amount in addition to the Rs. 6000 given annually under PM-Kisan Samman Nidhi to the farmers while outlining schemes specific to different states. While promising to provide three additional free gas cylinders under the Ujjwala Yojana to poor women, their education has been brought into focus by announcing various schemes to be implemented by the BJP governments in these states. The Sardar Vallabh Bhai Patel Agri-Infrastructure Mission, six mega food parks, formulation and strengthening of MSP, modernization of sugarcane mills in UP, dairy cooperatives, Parvat Mala project, Mission Himvant in Uttarakhand, apart from various schemes, the commitment of making Goa a Rs. 50 billion economy, schemes like FOFO train, Loktak mega eco-tourism project, funds for start-ups promoting tourism in Manipur and promises for loan waivers for farmers, reservation in jobs for local youths, monetary help to the victims of terrorism, free electricity upto 300 units and reservation for women are some of the major highlights of these visionary documents.

The BJP has been able to provide a corruption-free government, ensuring law and order while heralding an era of the politics of development and performance in different states where people provided it an opportunity through its blessings. The change can be seen anywhere in UP, Uttarakhand, Goa, and Manipur, where BJP governments have served the people with tireless hard work and commitment, bringing these states into a high growth trajectory. Under the strong and visionary leadership of Prime Minister Shri Narendra Modi, the BJP has been able to fulfil the expectations of the people across the country while increasingly gaining massive support from the people. There is no doubt that amid the plethora of dynasty, caste, and region-based sectarian political parties, the BJP shines out as the only hope of the nation.