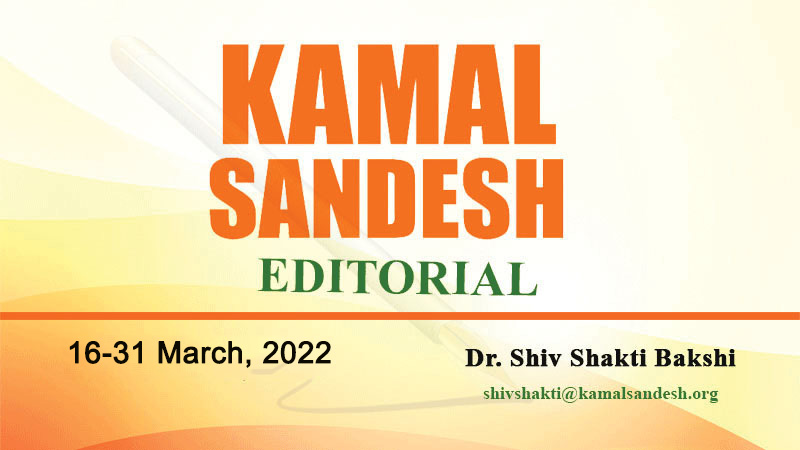 The huge support of the people across India has once again reflected in the massive mandate that the people have given to the BJP in the recently held assembly elections. In the four out of five states that went to the polls, the BJP has not only emerged victorious but also scripted a history of its governments getting re-elected after successfully completing their terms. In Uttar Pradesh, Uttarakhand, Manipur, and Goa, people have re-elected full-majority BJP governments, ending an era of political instability in these states. In Uttar Pradesh, the incumbent chief minister, Yogi Adityanath, not only completed his full tenure of five years successfully but also received more than two-thirds majority, showing immense faith of the people in the BJP and its policies. For the first time in decades, the same party government was re-elected and a chief minister got people’s positive mandate after completing the full term. In Uttarakhand, people broke the trend of voting differently every five years and strongly supported the BJP for the second consecutive term. In Manipur, the BJP government was re-elected with a comfortable majority, and in Goa, the BJP has got the required numbers to form the government in the state. The overwhelming blessings which the BJP continues to receive from the people under the dynamic and charismatic leadership of Prime Minister Shri Narendra Modi is a new phenomenon in Indian politics, defying the three decades of political instability in the country. The massive win in these four geographically and demographically apart states shows that the politics of good governance, development, and performance has now created a lasting niche in the heart of Indian politics.

The verdict of the people in these four states may be seen in the context of the two years of the COVID-19 pandemic, which led to an unprecedented global crisis at various levels. It was a challenge that appeared insurmountable in India, but under the strong and determined leadership of Prime Minister Shri Narendra Modi, the nation not only tried to convert these challenges into opportunities but also led from the front in helping many needy countries across the world. The entire world witnessed India’s firm resolve to fight the crisis when, for the first time, “Made in India” vaccines were produced in large quantities in India itself within a record time. It resulted in the success of the world’s largest and fastest vaccination programme, which was able to provide more than 90% of India’s huge population with at least one dose of vaccine within months. Not only this, these “Made in India” vaccines were made available to other needy countries, making India a leading country in the fight against the pandemic. The free ration, various assistance to the vulnerable section of the society, the Seva-Hi-Sangathan programme by millions of dedicated BJP karyakartas, the selfless commitment of doctors, nurses, paramedics, administrative staff, and Corona warriors, and the call of “Aatmnirbhar Bharat” by the PM, launching innumerable initiatives during the COVID-19 pandemic, has further strengthened the faith of people in the indefatigable leadership of PM Shri Narendra Modi and the selfless commitment of the BJP karyakartas. The people of India are not only proud of these achievements, but they are also confident of meeting any challenges that come their way as they strive for a brighter future.

While the nation was unitedly facing the challenges of the pandemic, the opposition parties were busy scoring political points through false propaganda and baseless campaigns. The nation will never forget the way the Congress and other opposition parties tried to break the morale of the nation by instilling fear, suspicion, and negativity in the hearts of people by questioning the nation’s capability and by maligning “Made in India” vaccines. The people have rightly punished them in this election and defeated their politics of lies, deceit, and betrayal. While the BJP has received overwhelming support from the people of Uttar Pradesh, Uttarakhand, Manipur, and Goa, the people of Punjab, who have defeated and ousted the Congress this time, will undoubtedly give the BJP their full support in the days ahead. The people have also shown their increasing faith in the BJP in the recently held local body elections in Tamil Nadu and Assam. There is no doubt that the name of BJP is now indelibly inscribed in the hearts of the people.