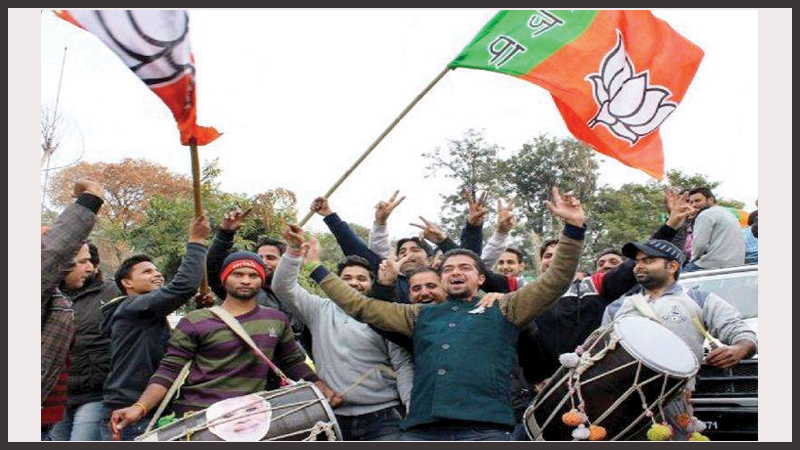 The BJP swept the Jammu Municipal Corporation (JMC) elections and performed well in Kashmir valley, by winning 100 wards, in the four-phased Urban Local Bodies elections in the state for which results were declared on 20 October, 2018.
In Jammu, the Congress suffered a big loss in the election, winning only 14 seats in the 74-member house. Independent candidates won 18 seats in the JMC. But the Bharatiya Janata Party won 43 of the 75 seats of the powerful Jammu Municipal Corporation, a gain of 18 seats when compared with last municipal polls held in 2005. The previous strength of BJP was 25 in the House.

In rest of the 446 wards spread across Jammu region covering a total of 36 municipal committees and councils, the BJP had an edge over its rivals in 15 bodies followed by Independents in 12 and the Congress in five.

The BJP won a total of 169 seats in these bodies followed by independents at 167 and the Congress at 96, the election officials said.

The election in the 521 municipal wards in the 10 districts of Jammu was held in the first three phases of the elections in the state, which concluded on October 16, recording a high voter turnout of 68.4 per cent among the over 6.44 lakh electorate. Thirteen candidates were elected to different municipal wards unopposed, leaving a total of 2,137 candidates in the fray.

The JMC along with seven municipal committees of Jammu went to polls in the first phase on October 8, registering a turnout of 63.8 per cent.

The Jammu and Kashmir National Panthers Party (JKNPP) failed to open its account in the majority of the wards, including the JMC.

However, in Kashmir valley, as per elections authorities, independents emerged as the single largest group in the elections by winning 178 wards across 42 municipal bodies in Kashmir division, including Leh and Kargil. The Congress bagged 157 wards, while the BJP won in 100 wards in the valley. The NC and PDP boycotted the elections.

In the Srinagar Municipal Corporation (SMC), the independents bagged the 53 seats in the 74-member body, while the Congress won 16 and the BJP won in four wards.


“I thank the people of Jammu and Kashmir for their support to the @BJP4JnK in the urban local body elections.”

“These results are a reflection of aspiration of people of Jammu and Kashmir, who want to move away from politics of strife towards PM Modi’s politics of development. I thank them for their continued support and assure them that the BJP will leave no stone unturned to realise their dreams”.