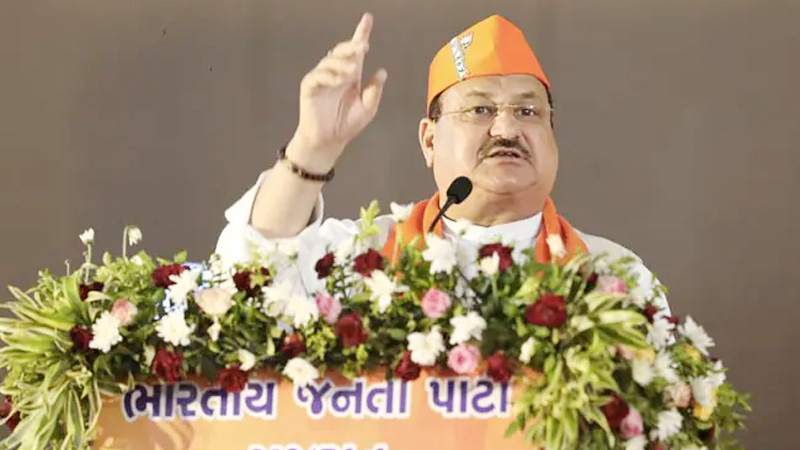 BJP National President Shri JP Nadda on a day-long Pravas arrived at Ahmedabad in Gujarat on 29 April 2022. After his arrival, Shri Nadda first visited Mahatma Gandhi Ashram at Sabarmati, Ahmedabad. He then reached state BJP headquarters ‘Kamalam’ in Gandhinagar and addressed a gathering of key party leaders, including MPs, MLAs and Executive Committee members of the party.

Shri JP Nadda also reached the Gujarat University convention centre in Ahmedabad and addressed nearly 7,000 party Karyakartas from across the state. After attending a religious event in Vadodara, the BJP National President held a meeting with BJP state core committee leaders, including state unit President Shri CR Patil and Chief Minister Shri Bhupendra Patel at the party headquarters in Gandhinagar before winding up his Pravas.

Addressing a press conference at Gujarat BJP headquarters ‘Kamalam’ in Gandhinagar, BJP National President Shri JP Nadda said, “Gujarat is the laboratory of party organization and governance for the BJP. We will implement this model across the country. As the party President, it is also my responsibility to take this model ahead”.

Successful experiments to develop the party and to make it a medium of change were carried out in Gujarat even when Shri Narendra Modi was a party office-bearer and later the Chief Minister of the state. As the CM of Gujarat, Shri Narendra Modi created a successful development model. At the national level, we are now seeing the reflection of that experiment,” Shri Nadda added.

ADDRESS TO KARYAKARTAS IN GANDHINAGAR

Addressing party office bearers from Taluka level to state level, MLAs and MPs in Gandhinagar, Shri JP Nadda said PM Shri Narendra Modi’s politics is based on development and it has given a tough challenge to the politics based on caste, community, region and dynasty.

He said now as the Congress party has become a party of brother and sister and regional parties have become family fiefdoms, therefore, the BJP is the only true democratic and national party in the country.

The BJP National President said the party has changed the political culture in India under the visionary guidance of Prime Minister Shri Narendra Modi. He said any party which wants to compete with the BJP will need to work hard for at least 50-60 years to be a worthy opponent.

After addressing party leaders including MPs and MLAs at the state BJP headquarters in Gandhinagar, Shri Nadda addressed nearly 7,000 party Karyakartas at the Gujarat University Convention Centre in Ahmedabad.

In his speech, he said that the BJP is the only true democratic and national party now in the country. Except the BJP, there is not a single democratic and national party in the country because all the parties and regional parties have now become family-controlled parties. For example, National Conference and PDP in Jammu and Kashmir, Akali Dal, Lok Dal, Samajwadi Party, RJD, BJD, YSR Congress, TRS, DMK, NCP and Shiv Sena, where is democracy in them, he asked.