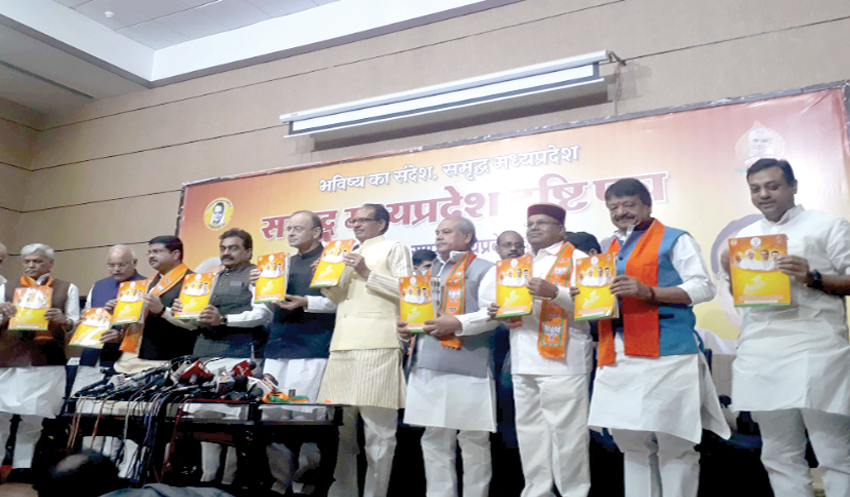 In the main Drishti Patra titled “Samridh Madhya Pradesh Drishti Patra”, the BJP promised to distribute loans of Rs 40,000 crore among farmers, expand the area under irrigation to 80 lakh hectares in the next five years and a university to promote food processing.

In its women’s Drishti Patra , the “Nari Shakti Sankalp Patra”, the party promised to install sanitary napkin vending machines in schools, a Scooty to every girl who gets more than 75 percent marks in the Class 12 board examination, and to double the intake capacity of the educational institutions for women in five years.
The documents were released by Union Finance Minister Shri Arun Jaitley in the presence of Chief Minister Shri Shivraj Singh Chouhan; Union Minister Shri Narendra Singh Tomar and other state-level BJP leaders at BJP State headquarters in Bhopal on 16 Nov 2018.

The party promised a “direct payment of a proportionate bonus” to small and marginal farmers -those owning up to five acres of land.

Some of the other promises made are the availability of all government facilities and information through e-governance, wildlife police stations in areas known for poaching, libraries and gyms in all new police stations, creation of a forensic science directorate, identification of illegal mining through satellite-based tracking systems, and expanding the base of the Deendayal Antyodaya Kitchen scheme to all the districts to offer meals at Rs 5 per head. On the religious front, the Drishti Patra underlined several facilities on the Narmada Parikrama Marg, the development of several places in the Buddhist circuit, an increase honorarium to priests and mahants, and the creation of a religious places management authority to address the problems related to temples.

CM Shri Shivraj Singh Chouhan said it would benefit 80 lakh farmers, adding that the bonus would be paid on the basis of production and would not entail the purchase of agricultural produce.

The party also promised the “Har Hath, Ek Kaj Yojana” (the “work for every hand scheme”) to impart job skills to one unemployed person in every household.

It promised to create 10 lakh jobs for the youth every year. The ease of doing business would be enhanced by setting up a “CM Hotline” and reducing the administration’s response time to investors to 72 hours, the Drishti Patra said.

The Drishti Patra also promised to set up a “global skill park” in Bhopal and a new industrial township in the state. Investments of Rs 5 lakh crore would be brought to the state in the next five years, the BJP Drishti Patra said.

Besides the construction of the Bhopal-Indore, Gwalior-Chambal and Narmada expressways, the party promised the “Atal Samriddhi Mala” and the development of a defence production cluster in the Gwalior-Datia-Bhind-Morena region. It said the BJP government would spend Rs 2 lakh crore on urban infrastructure in the next five years. The Drishti Patra provided a roadmap to convert Madhya Pradesh into a developed state.

The 230-member Madhya Pradesh Assembly will go to the polls on November 28 and the results will be announced on December 11.

–Identification of hot spots related to crimes against women

–Employment to at least one person from every family

–Establishment of intellectual property cell in every government college

–Creation of an integrated job portal

–Annual budget of Rs 1,000 crore for creating self-employment opportunities for the young

–A doorstep delivery of government services

–Piped water to 10 lakh households of the state