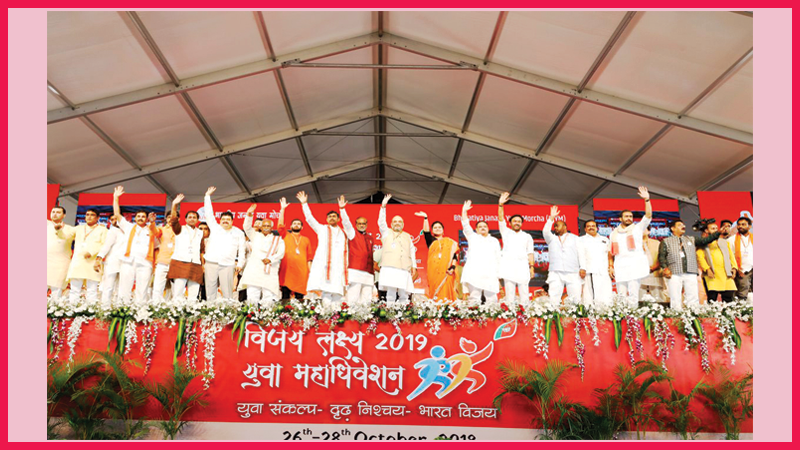 Bharatiya Janata Yuva Morcha’s three-day National Conclave ‘Yuva Maha Adhiveshan’ got off to a colourful start at the Parade Grounds in Hyderabad, Telangana on 26 October, 2018 as delegates from all over the country attended at the venue. Union Minister Shri Rajnath Singh inaugurated the conclave and also delivered the maiden speech.

BJP National President Shri Amit Shah delivered the valedictory address on 28 October, 2018 which was preceded by a bike rally taken out by the activists from different parts of the State.

He described the ‘mahagathbandhan’ of Opposition parties as a ‘dhakosla’ and accused it of breaking India, while the Narendra Modi-led government was working for making India.

“Shri Modiji says remove poverty, unemployment, insecurity…but Mahagathbandhan leaders say remove Modi,” he added. Criticising the grand alliance, the BJP President said it “neither has a policy nor a leader nor any principles.”

Taking a dig at Congress President Rahul Gandhi over his comments on the recent arrest of activists by the Maharashtra government over alleged links with Maoists, Shri Shah said, “I want to tell Rahul Gandhi that whoever raises slogans on breaking India will land behind bars and they will never be pardoned.”

He said the Modi government has launched several schemes and worked for the poor, farmers, women, Dalits and tribals.

Asserting that the BJP is ready to fight the 2019 elections under PM Shri Modi’s leadership, the BJP President urged the Yuva Morcha Karyakartas to reach out to people and create awareness about the NDA government’s achievements.

On the issue of National Register of Citizens, the BJP National President said, “Rahul Baba talks of their human rights, but is not concerned about human rights of our security forces. Infiltrators explode bombs killing security forces. Are you not concerned about their (security personnel) wives and children?” he asked adding that the issue might be a vote bank matter for the Congress, but for BJP it is security of the nation.
“Once the BJP is re-elected after 2019 polls, I guarantee that the party-led government will initiate the process of evicting illegal immigrants from all parts of the country,” he added.

Slamming the TRS government in Telangana for not celebrating the Hyderabad Liberation Day, Shri Shah said it was ‘scared’ of MIM and its chief Asaduddin Owaisi.