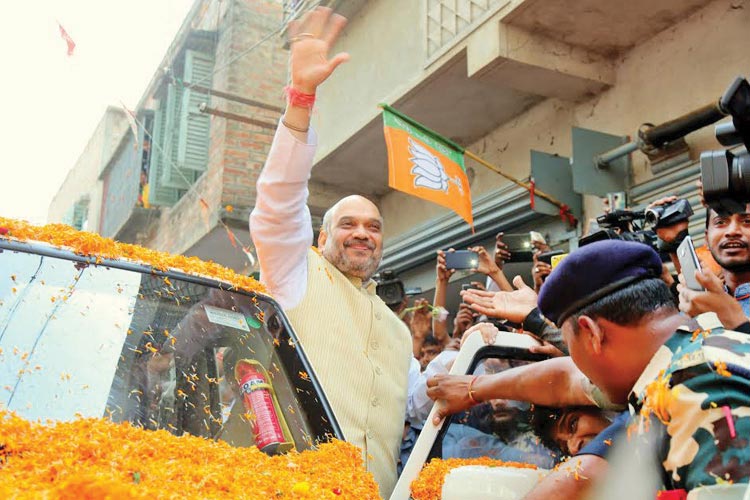 BJP National President Shri Amit Shah made a three day’s Pravas in Bengal from April 25 and reached out to common people in Naxalbari, the birthplace of Left-wing extremism in India and Bhabanipur, which is CM Mamata Banerjee’s constituency. He kicked-up his three-day tour of West Bengal from Naxalbari, the place Naxal motion had begun in 1960’s, and mentioned that the BJP would win lots of the Lok Sabha seats from West Bengal in 2019. His three-day visit is aimed at strengthening the organisation in West Bengal and emerge as the principle opposition to the ruling Trinamool Congress.

Addressing BJP workers in Kolkata Shri Amit Shah described Bengal as the “most poverty-stricken state” in the country and said once BJP came to power in the state, it would flourish like Maharashtra and Gujarat.
Asserting that Bengal was next on the radar, Shri Shah said he had coined a slogan, ‘Ebar Bangla’ (this time, Bengal) for the purpose. “I witnessed massive enthusiasm among the people during my visit and I am sure that the BJP will win in Bengal,” he added.

The BJP president slammed the Left front and TMC for turning West Bengal into a poorer state. “The Communist and Trinamool Congress made the Sonar Bangla a poorer state. These days, unemployment, violence and appeasement politics have brought an atmosphere of misrule in Bengal.

Only the BJP under Narendra Modi’s leadership can provide such a government. No one else can,” he said, adding, “Bengal will flourish like Maharashtra and Gujarat.”

He also accused the Mamata Banerjee-led West Bengal government of unleashing atrocities on the people in a way never seen since Independence.

Earlier, the BJP President visited three houses at Gouranganagar, on the outskirts of Kolkata city, as part of a mass contact programme aimed at expanding the party’s base in the state. The residents greeted him by blowing conch shells and offered him sweets.

At a core committee meeting with state BJP leaders, he reportedly asked them to reach out to the masses and expand the party’s organisation. 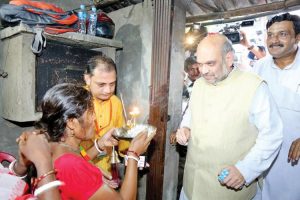 He said the BJP leadership to reach out to people educating them about the development that the BJP under the leadership of Narendra Modi has ushered in the states that are being ruled by us.

Shri Amit Shah has also called for discipline among the party workers.

Holding a meeting with booth-level party workers at Rajarhat he said, “The atmosphere I have seen in last three days has made me confident that next time, BJP will form a government in West Bengal. It will be a government for the people, which will make sure that you do not have to move court to hold immersion of Durga idols. Once a BJP government is formed, Bangladeshi infiltrators will be stopped at the border and youth will get employment,” Shri Shah told party workers at Rajarhat. 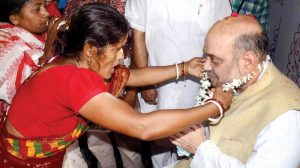 “In the last three days, I have interacted with the people of West Bengal. The kind of atrocities the state government has inflicted on the people of West Bengal has never been seen anywhere in the country after Independence. You can never see the kind of poverty, which is visible here, in any other state of the country,” Shri Shah said. He added, “I assure you that once a BJP government is formed in West Bengal, the state will turn into a happy state like other BJP ruled states. 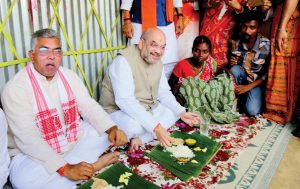 The kind of response the BJP has received, I am confident that people would bring another change (poribortan) here.”
At the booth-level meeting at Sukantanagar in Rajarhat, he launched a ‘booth chalo abhijan’. He also met locals who offered him sweets and showered flower petals on him.

‘No maachher jhol or Bengal’s famous fish curry for Shri Shah. I served a simple vegetarian meal of rice, daal, potol or pointed gourd and a squash curry, with salad and papad’, said Smt. Geeta Mahali after hosting Shri Shah.

At the modest home in Dakkhin Katiajote village, Shri Shah received jamai ador, special treatment reserved for a son-in-law.
Smt. Mahali, in a red and green sari, sat to Shri Amit Shah’s left as he ate. To his right sat the BJP Bengal President Shri Dilip Ghosh. As he launched the BJP’s Mission Bengal, Shri Shah has set an internal target for Shri Ghosh and his team. He said uproot Mamata Banerjee’s Trinamool Congress by 2019, when Prime Minister Narendra Modi will seek a second term in the national election.

“The Trinamool Congress may think they can stop Modiji’s chariot, but they cannot stop it. The more they try to stop us, the more the lotus will bloom here,” Shri Shah said at a meeting of BJP workers after the lunch, adding, “In 2019 Lok Sabha polls, the BJP will get the maximum number of seats in West Bengal. The people of the country will witness it.”

To establish the BJP at the grassroots in West Bengal, the BJP President Shri Amit Shah launched a booth-level campaign ‘booth- Chalo’ in Naxalbari, where the violent Naxal movement of the 1960s had begun.

Shri Shah said Bengal symbolizes unemployment, violence and appeasement politics and only a BJP government can change it. 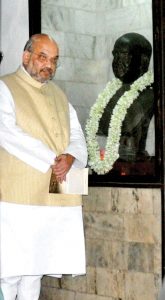 Interacting with media persons BJP president once again reiterated that next time the BJP will form government in Bengal. “I have been here for three days. On Tuesday, I had been to North Bengal. On Wednesday, I spent time at Bhawanipore and today I am here at Rajarhat. Poverty that I have witnessed in Bengal exists in no other place in the country. Another ‘paribartan’ in Bengal is inevitable”.

BJP National President Amit Shah on 06 May, 2017 said that the tribal couple with whom he had lunch in West Bengal last month was forcibly made to join the ruling Trinamool Congress.

“The tribal couple did not join the Trinamool on their own, they were forced to join the ruling party,” Shri Shah told reporters in Agartala.

Noteworthy, Raju Mahali and his wife Geeta had hogged media limelight when Shri Amit Shah ate food at the tribal couple’s village home at Naxalbari in West Bengal on 25 April. As per media reports the TMC leaders forced the couple to join their party after BJP President’s visit.