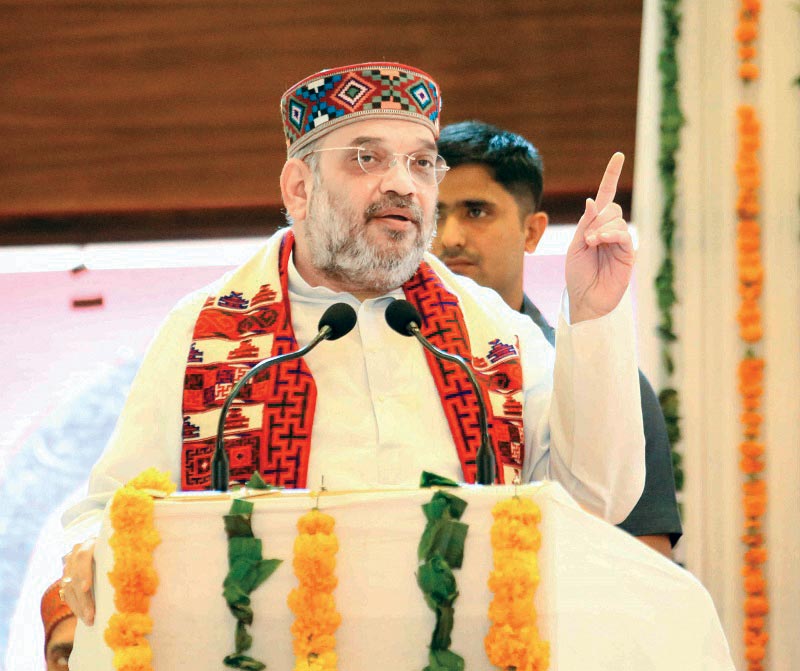 Bharatiya Janata Party National President Shri Amit Shah on reaching Himachal Pradesh for a two-day visit to the state was given a rousing welcome at the Dharamsala airport, Himachal Pradesh on May 04, 2017.

The two-day meeting with state party leadership was held at Palampur town. It was attended by state leaders, office bearers of the district and block units and various frontal organizations. The BJP president gathered feedback from the state party leaders to draw effective strategy for assembly polls.

BJP president Shri Amit Shah launched an attack on the Congress government in Himachal Pradesh, accusing it of not utilising the funds sanctioned liberally by the Centre.

He also predicted a landslide victory in the upcoming assembly elections with a two-third majority and said the Central funds will be spent once the party forms the government in the hill state.

Talking to mediapersons, Shri Shah said that corruption was rampant in Himachal Pradesh. While mafias are ruling the roost, it is surprising the chief minister is treating the corruption charges as “medals”, Shri Shah said, taking a dig at Virbhadra Singh, the state’s CM. “The funds given by the Centre are not being fully utilised and it appears that these funds would be spent by the BJP government after the assembly polls,” he said, adding that the NDA government had been too liberal in sanctioning projects and funds to the state.

He said that the centre had sanctioned Rs 2850 crore for Una-Hamirpur railway line and the survey of Bhanupalli- Bilaspur-Mandi-Manali-Leh strategic railway line had been completed, while several other projects are in the pipeline.

The state got Rs 28,450 crore as deficit grants from 14th finance commission against Rs 11,131 crore by 13th finance commission while share in central taxes jumped from Rs 7,829 crore to Rs 46,250 crore, he said, adding the Modi government was adopting “all embracing” policies with focus on poor and not discriminating against any government.
He said that tickets for assembly elections would be given to new faces with clean image and the party was fully geared up for the polls.

Congress was not a party but a special purpose vehicle

National BJP president Shri Amit Shah addressing a meeting of intellectuals from across the state, who came to meet him at the conclave on 05 May said the Congress was a patriarchal party. There were just two parties in the country, the BJP and the Communist party that have internal democracy. “Can anybody tell who would be the next president of BJP, but everybody can tell who would succeed Sonia Gandhi as Congress president,” said Shri Shah.

Shri Shah said the Congress was not a party but a Special Purpose Vehicle (SPV) before independence. People from different ideologies joined the Congress for the freedom of country. However, after independence the SPV had lost its relevance and became a political party. Leaders like Shyama Prasad Mukherjee left Congress due to ideological differences. The leaders in Congress at that time were not corrupt. However, the Congress was moving towards the policies of western countries. The Congress wanted reconstruction of India after totally dismantling the old whereas leaders like Shyama Prasad Mukherjee, who founded Jan Sangh, wanted Indian culture and civilization as base of development of the country, he said.

He said the BJP had started with just five permanent workers but now had 11 crore workers across the country, 1,387 MLAs and 325 MPs in Parliament. The BJP had its government in 14 states and consecutive victories of the party in different parts of the country illustrate that the policies of the party were being accepted by the people.

He also praised the working of the Narendra Modi government and said that just by transferring the subsidy of LPG cylinders online union government had saved Rs 14,000 crores. Accepting the appeal of the Prime Minister 1.25 crore people in the country had given up LPG subsidy. The benefits of money saved were passed by the government to the poor of the country. Two crore new LPG connections have been given to the poor women across the country. Besides, 7 crore new toilets have been built for the poor, he said.

During the conclave of intellectuals Shri Shah also honoured N K Kalia, father of Kargil martyr from Palampur, Saurabh Kalia.
He said that Himachal was the land of martyrs since independence and the Prime Minister had special love for the state. He had given several benefits to the state but the government here was not passing them on to the people.