Addressing massive public meetings held in Valsad, Navsari and Ankleshwar, BJP National President Shri JP Nadda said, Bharatiya Janata Party will win all seats in the upcoming Gujarat Legislative Assembly elections this time, will break the record and form the government again with a historic majority. The polling for 182-member Gujarat Legislative Assembly will be held in two phases on December 01 and 05 and counting of votes will be held on December 08, along with Himachal Pradesh

Bharatiya Janata Party National President Shri Jagat Prakash Nadda addressed huge public meetings held in Valsad, Navsari and Ankleshwar, Gujarat on 16 November, 2022. Speaking to the public he said under the leadership of Prime Minister Shri Narendra Modi, Bharatiya Janata Party will win all seats in the upcoming Gujarat Legislative Assembly elections this time. We will break the record and form the government again with a historic majority.


Shri Nadda said Gujarat is the land of Mahatma Gandhi and Sardar Patel. Pujya Bapu wrote the country’s freedom saga showing the path of truth and non-violence, while Iron Man Sardar Patel tied the whole country in the thread of unity. Now,

Underlining the work done by the Modi government for the welfare of the tribals, the BJP President said no one did the work what the Modi government at the Center has done for the welfare of the tribal brothers and sisters and upliftment of their living standards. Why didn’t any other political party think of giving respect to tribal brothers and sisters till 70 years of our independence? The President of India can also be a poor tribal woman, why didn’t Congress and its allies think of this before?

Shri Nadda said it is the Bharatiya Janata Party government, which first made Shri Ramnath Kovind, who came from a poor Scheduled Caste family, the President of India and secondly, honored Smt. Draupadi Murmu, a poor tribal daughter by making her the President of India, country’s highest constitutional post.

Whether, it is about celebrating Tribal Pride Day, about building a museum for tribal freedom fighters, about buying forest produce at MSP, about giving land leases to tribal brothers and sisters, about opening Eklavya Model School for education or whether, it is about the development of tribal villages – every step taken by the Modi government for the welfare of tribals, leads the tribal brothers and sisters on the path of development.

under the dynamic leadership of Prime Minister Shri Narendra Modi, Gujarat is showing the way forward to the country and the world. The Gujarat model of development has not only changed the picture of Gujarat but has also taken the country on a new path of progress.

Only BJP worked on the mantra of “Sabka Saath, Sabka Vikas and Sabka Vishwas”

BJP National President Shri JP Nadda while addressing a mega election rally in Surat, Gujarat on 18 November, 2022 said development is associated with us. Congress always works to break the country. Rahul Gandhi even went to Jawaharlal Nehru University in 2016 and stood with those who protested against the hanging of Afzal Guru, mastermind of the Parliament attack.

Lashing out at Rahul Gandhi over his remarks against VD Savarkar, he said the Congress leader is out on the road doing Bharat Jodo Yatra to “not to unite India, but to break it”. The condemnable statement against freedom fighter Veer Savarkar shows about their thinking.

Shri JP Nadda further said that all the parties in the country did vote bank politics and worked to divide the people of the country into castes and religions, while only the BJP worked on the mantra of “Sabka Saath, Sabka Vikas and Sabka Vishwas”.

Further slamming Congress over their stand on the Jan Dhan Account, Shri Nadda said, “Congress was making fun of us when BJP was opening “Jan Dhan Account”. But today, 47 crore Jan Dhan accounts have been opened. After the account was opened, PM Shri Narendra Modi made direct transfers of 500-500 rupees for three months to the accounts of 20 crore women during Corona,” he said.

He said in 1960, Jawaharlal Nehru made only one AIIMS in the country. Atal Bihari Vajpayee ji made six AIIMS and today, Shri Narendra Modi ji made 15 AIIMS. 200 new medical colleges have been opened. New dimensions of development are being written,” he said.

Addressing a rally in Bharuch, Gujarat on 18 November, 2022 BJP National President Shri JP Nadda said Indians were able to move without masks freely only because of PM Shri Narendra Modi’s efforts while even US President Mr. Joe Biden still roams around wearing a mask.

Many in the US and Europe are yet to get even two doses of Covid vaccines while everyone in India is getting booster doses. The world’s economy slowed down due to Covid, but India emerged as the fifth-largest economy, leaving Britain behind. 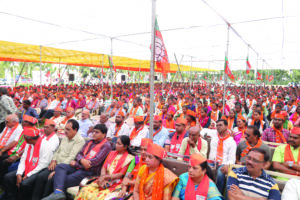 Earlier, aircraft manufacturing was concentrated in the US, Germany, and Europe. We could not even imagine that India would ever make aircraft. Now, C-295 aircraft will be made in Vadodara. Shri Nadda said all this has become possible only because of PM Shri Narendra Modi.