Stating that he can sense massive public anger against the Mamata Banerjee government in West Bengal, Union Home Minister Shri Amit Shah on November 5 said that the days of the Trinamool Congress government were numbered and that the BJP will come to power with a two-third majority in the Assembly polls next year.

“I want to appeal to the people of Bengal to uproot the TMC government and give the BJP an opportunity to form the next government. We will transform the state into Sonar Bangla (Golden Bengal),” he said.

On a two-day visit to the state, Shri Amit Shah landed in Kolkata on November 4 and reached Bankura, on the western part of the state, on November 5. He began his visit by garlanding the statue of Birsa Munda, a renowned freedom fighter who came from the Munda tribe.

While talking to media Shri Shah said, “I am in West Bengal since last night and can sense the massive public anger against the Mamata Banerjee government. We are confident of bringing in change in the state under the leadership of Prime Minister Shri Narendra Modi. The Mamata Banerjee government has stopped benefits of Central schemes from reaching to the tribal people, the poor, the farmers, and people from the backward classes in Bengal.

“If Mamata Banerjee thinks that by stopping implementation of Central schemes in Bengal she will stop the BJP, then she is mistaken. The way the state government has oppressed BJP workers here, I am confident that the death knell has begun for the TMC government.”

He said: “The tribal people of Bengal are not getting benefit of housing schemes started by the Centre. The poor are not getting healthcare schemes and the farmers are not getting the annual aid of Rs 6,000. If you (Banerjee) let these people enjoy the benefits of these schemes, they may at least spare some thoughts for you.”
After the garlanding ceremony, Shri Shah held an internal meeting with party workers and leaders from 13 districts to chalk out strategies for the next year’s Vidhan Sabha polls.

Shri Shah was offered a traditional Bengali vegetarian meal by the Hansda family and spent some time with them. “Had amazing Bengali food at Shri Vivishan Hansda ji’s home in Chaturdhi village. No words can express their warmth and hospitality,” the Home Minister said in a tweet.

Shri Amit Shah addressed a press conference at the Westin Hotel in Kolkata on the second and last day of his two-day pravas of West Bengal attacking the anarchist policies of the Trinamool Congress government and called upon the people to overthrow the Mamata government and form the BJP government. Earlier, Shri Shah offered prayers at Dakshineswar Kali Temple. After the puja, Shri Amit Shah while talking to reporters said that he has wished the Mother Kali for the well being of entire state and countrymen. 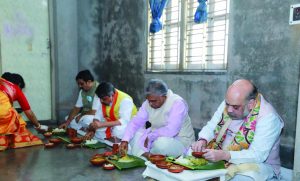 He said that this land has been the land of Chaitanya Mahaprabhu, Thakur Ramakrishna Paramahamsa, Swami Vivekananda and Sri Aurobindo, who empowered the path of devotion and awakened the spiritual consciousness. But unfortunately the politics of appeasement has deeply hurt the rich tradition here. I urge the people of the state to discharge their responsibilities with full dedication to restore the glory of West Bengal, once the center of spiritual and religious awakening.

Shri Amit Shah said that on May 2011, there was a change in West Bengal with the slogan ‘Maa-Mati-Manush’. The people of the state also had many expectations and hopes and wanted their aspiration to get appropriate response. Plagued by three decades of communist rule, the command of Bengal was given to the Trinamool Congress. But 10 years later, today the slogan of ‘Maa, Mati and Manush’ has changed to appeasement, dictatorship and tolabaji. The Trinamool government and the Chief Minister of the state failed to meet the expectations of the people.

Shri Shah, while sharply questioning the Mamata government on the atrocities on women in West Bengal, asked why did Mamta ji not send the crime records of West Bengal to the National Crime Records Bureau since 2018? What are you trying to hide and why? People want to know about the law and order situation of the state. I want to ask Mamta ji seven questions that despite being a woman Chief Minister, what did you do for women safety in Bengal?

The promises made by the Mamta government to the people of the state proved to be hollow, disappointment and hope turned into anger. A strange kind of atmosphere is visible amidst the people of Bengal. Hundreds of people came to road, wherever I went. When they used to shout slogans of Bharat Mata ki Jai, Vande Mataram, Jai Shri Ram,it was less in our welcome, displaying more anger towards Mamata government.

Shri Amit Shah added that I have come to assure the people of Bengal that you gave opportunity to Congress, gave opportunities to communists again and again and gave two opportunities to Mamata ji. Give one chance to the BJP under the leadership of Modi ji, we promise to make Sonar Bangla within 5 years. Our aim is clear that Bengal should be developed, the borders of the country are secure, infiltration inside Bengal should be stopped. The only goal of the Trinamool Congress and Mamta Didi is to make her nephew, the Chief Minister in the next term. Now the people of Bengal have to decide whether they need ‘Parivarvad’ or ‘Vikasvad’.