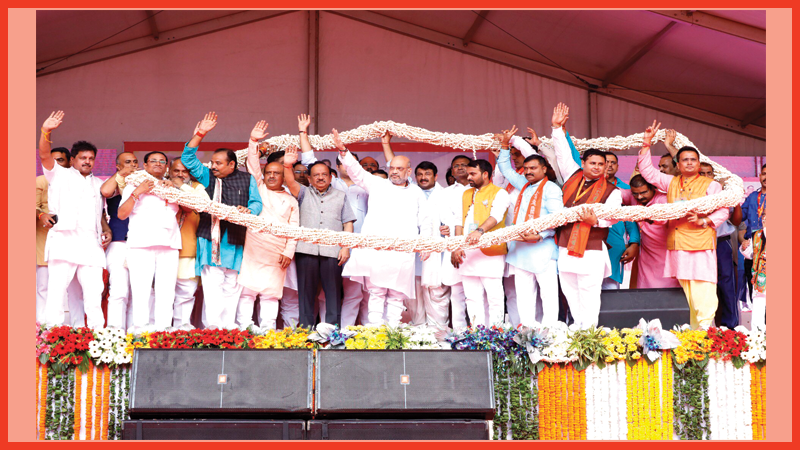 Bharatiya Janata Party National President Shri Amit Shah said the BJP will sweep all seven seats from Delhi in the Lok Sabha elections and that the BJP victory would “open the eyes” of the Aam Aadmi Party (AAP) government and help them realize the level of dissatisfaction among the residents of Delhi.

Speaking at the Purvanchal Mahakumbh, an event organised by the BJP’s Delhi unit to address the issues of the migrants from eastern Uttar Pradesh and Bihar at Ramlila Maidan on 23 September, 2018, Shri Shah said, “This huge gathering, only from the people of Purvanchal, shows the support (Prime Minister) Narendra Modi has. We are confident that all the seven Lok Sabha seats from Delhi will fall on to our lap.”

Donning saffron caps and scarves, thousands of people hailing from Purvanchal (which comprise 40 lakh or roughly 20% of voters in the national capital) marched to Ramlila Maidan so that they could be a part of the gathering organised especially for them and to celebrate the culture they have brought from their states.

At the rally, Shri Shah said the BJP government’s focus has been on “development” and it has been possible only because of the hard work and sweat of their “brothers from Purvanchal”. “You (Purvanchalis) have moved around to make your contribution towards nation building… Our government will not rest until the region is completely developed,” he said.

He maintained that Delhi Chief Minister Arvind Kejriwal only knows how to shout out lies before the people of Delhi and repeat those lies several times — hoping voters will believe them to be true. “We do not need to shout, our work speaks for itself. The proof to this is the attendance here today,” Shri Shah said.

The BJP President also attacked the Kejriwal government for not taking a stand against the Rohingya settlements in the city. Calling the Rohingya refugees from Myanmar “termites”, Shri Shah said, that the priority of any government should be the welfare of their own country and not “infiltrators”.

Delhi BJP President Shri Manoj Tiwari said, “The people of Delhi will give their support to Modi ji and the lamp that we have lit today is a symbol of the 2019 victory.”

Shri Tiwari had also announced during the Purvanchal Mahakumbh at Ramlila Maidan that the party will shortly hold three “Maha rallies” at the same venue. He had also said that people attending the rally will vow to help Prime Minister Shri Narendra Modi win again. “The mood within the unit is very upbeat after the phenomenal success of the Mahakumbh. We are now preparing for more rallies that will be organised under Scheduled Caste, Mahila and Yuva Morcha wings of the BJP,” he said.