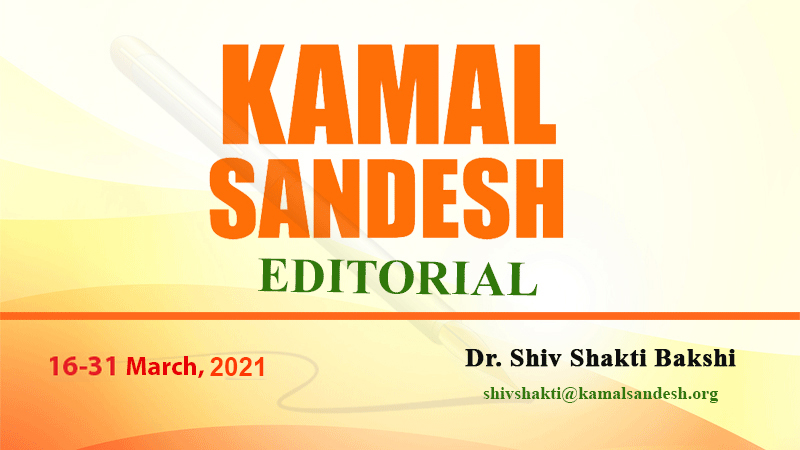 The elections process in the five states has started with the announcement of poll schedule for Assam, West Bengal, Tamil Nadu, Puducherry and Kerala. The polling spread over two months and scheduled to be held in various phases is expected to see huge people participation in the election process. As the Covid-19 pandemic is ebbing away, the people are engaging themselves in democratic process with renewed vigour which was very much evident in the elections held in Bihar, by-elections in various states and in numerous local body elections.

The Bharatiya Janata Party has emerged as most preferred choice of the people in all these elections with people reposing their faith in the leadership of Prime Minister Shri Narendra Modi more than ever before. The way India has been able to tide over the challenges of pandemic has become a glowing example for the entire world to emulate. The service which the BJP karyakartas rendered to the poor and needy during the pandemic has given a new dimension of a committed political party. BJP has been able to win the hearts of the people across the nation.

The BJP government in Assam has transformed the entire political and economic landscape of the state making it a symbol of peace, progress and development. The special focus of Prime Minister Shri Narendra Modi to the entire North-eastern region and more particularly Assam and effective implementation of government plans, projects and welfare schemes by Chief Minister Shri Sarbanand Sonowal has further strengthened the faith of people in BJP.

While in Assam people are set to re-elect BJP government, a massive surge for BJP can be seen on ground in West Bengal. The continuous betrayal by the Congress, Communists and TMC has resulted in deep disenchantment from these political parties among the people who are now looking forward to BJP for restoring the glory of the state. The Congress, Communists and TMC have become symbol of massive loot, misrule, political violence, politics of appeasement and regressive political culture. That the BJP has become a hope for the people was evident when the party was able to win 18 Lok Sabha seats in 2019 elections. The grounds well in favour of BJP is now growing by leaps and bounds with every passing day. There is no doubt that in these assembly elections the marginalization of Congress, Communists and TMC will be complete in state politics with BJP emerging as the massive force in West Bengal.

In Tamil Nadu and Puducherry, BJP is contesting elections in AIADMK alliance. The DMK-Congress alliance seems to be further losing ground as it has failed to come up with any promising alternative programme for the people. As AIADMK-BJP alliance is firmly in the saddle, its re-election in Tamil Nadu seems to be the only possibility in the state. After Congress government losing trust in Puducherry, AIADMK-BJP alliance is getting immense people support in the state.

In Kerala, a confident BJP is challenging UDF-LDF with new programmes and policies. After having improved its tally immensely in local body elections, BJP is getting support across the society with icons like Metroman E. Sreedharan joining the party. The BJP is set to spring surprises in Kerala assembly elections.

The public meetings of Prime Minister Shri Narendra Modi and BJP National President Shri JP Nadda are drawing massive crowds in all these election bound states. The recent meeting of the Prime Minister in Brigade ground, Kolkata clearly shows that people are ready for ‘Ashol Poribortan’. The tireless dedication of BJP karyakartas in serving the nation is getting reflected in the blessings of the people across the country. The people are looking forward to bless the BJP in all these five states.