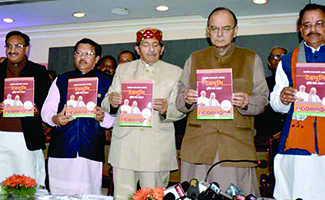 Union Finance Minister Shri Arun Jaitley released the BJP manifesto for Uttarakhand on 05 February, 2017 in Dehradun. He took a jibe at the ruling Congress, suggesting that Uttarakhand had seen more infighting than development in the past five years under the party. He stressed that BJP would focus on three main issues- education, employment and clean, corruption-free governance.

Shri Jaitley repeatedly attacked the Harish Rawat-led government, stating that it had failed on the two most essential counts of development and stability.

Shri Jaitley said BJP had a special connect with the hill-state and its people as it was formed when Atal Bihari Vajpayee was the Prime Minister. He further called for the formation of a BJP government in the state that would benefit the people of Uttarakhand because the BJP was in power at the Centre as well.

He gave a call for transforming Uttarakhand into a hub for tourism and education. Aiming to bring governance “to the last man” in the state.

Building boarding schools for girl students in the districts is also on top of the party’s agenda.

The vision document also vows to take effective steps to stop commercialisation of education and put an end to corruption prevailing in the sector.

Smartphones and laptops were also promised for academically outstanding students, who excelled in their fields.

Further, the manifesto called for prioritizing the study of Sanskrit, medicine and astrology in the state.

The BJP manifesto has also promised to start tele-medicine, air-ambulance and e-tendering services, if elected to power in the up-coming elections.

Manifesto also promises 24-hour electrification, creation of an anti-corruption cell and framing of a

BJP will formulate a road map for Uttarakhand’s development.

Existing medical colleges will be provided better facilities and efforts will be made to set up new ones. In view of the state’s tremendous potential in the tourism sector, steps will be taken to boost medical tourism by putting up health resorts, yoga and ayurvedic centres.

Home stay schemes will be made more effective besides finetuning facilities for tourists at the pilgrimage centres dotting the state.

Organic farming will be given impetus and interest free crop loans will be given to farmers besides giving preference to run of the river projects to tap the state’s huge hydro-electricity potential without interrupting the flow of the rivers, the vision document said.

Suitable infrastructural facilities will be created at Gairsain and consideration will be given to announcing it as the summer capital of the state by evolving a consensus over the subject.