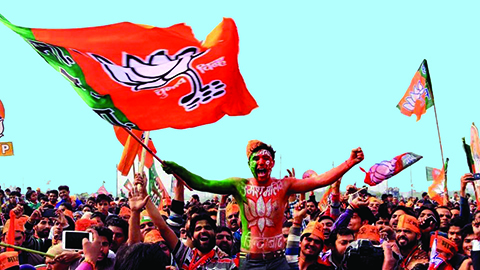 t is a clear mandate in favour of the BJP in the recently concluded 2017 civic polls in Maharashtra. Except for Thane, the BJP won every city corporation easily, while in Mumbai it is just two seats behind Shiv Sena. Of the 1,268 municipal seats, the party won 628, more than tripling its 2012 tally. There could not be a better affirmation of support for the party in power at the State as well as its Chief Minister, who sphere headed the campaign from the front. Besides fielding competitive candidates in places where the party had a strong base, the BJP’s strategy to field new and young faces yielded strong returns. The Congress and the Nationalist Congress Party were reduced to minor players in most of the corporations.

In Mumbai, the Shiv Sena has, for the first time since it came to power nearly 25 years ago, seen a close competitor in the BJP. Now clearly, the BJP has become the central pole of Indian politics, a position the Congress occupied for a long time.
In the recently concluded Maharashtra Municipal, Zila Parishads and Panchayat Elections the BJP made massive gains throughout the state. The BJP won eight Municipal Corporations i.e. Ulhasnagar, Nashik, Pune, Pimpri-Chinchwad, Solapur, Akola, Amravati and Nagpur and in Brihanmumbai Municipal Corporation (BMC), the party did very well and was only two seats behind Shiv Sena for which results were declared on 23 February, 2017. After the announcement of results, the BJP Karyakartas celebrated its impressive show as vijay utsav across the state.
The party also performed very well in Zila Parishads and Panchayat. The BJP won at least 470 seats, more than double of its 2012 tally of 205 across Maharashtra while the Shiv Sena won 215; it won 227 seats in 2012. During these elections, Chief Minister Shri Devendra Fadnavis himself spearheaded the campaign and decided the candidates and strategy of the party.
In the 227-member BMC, the BJP took its tally to 82 from 31 in 2012. The Shiv Sena got 84 seats, up from 75. The Congress tally went down from 52 to 31. The BJP also expanded its base and captured Pimpri Chinchwad, despite fierce competition from the NCP.
The biggest loser in Maharashtra was the Congress which saw its 2012 tally of 264 seats fall to an incredible 99. Such was the disappointment that Sanjay Nirupam, the party’s Mumbai President resigned from his post. The MNS too had an extremely poor showing winning just 16 seats across Maharashtra; it had won 112 in 2016. Sharad Pawar’s Nationalist Congress Party(NCP), on the other hand, won 108 seats. It had won 265 in 2012.

BJP is capable of winning major States on its own

Finance Minister Shri Arun Jaitley too hailed the party’s astounding win in Maharashtra saying the results confirms that the party is capable of winning major states on its own. He also hit out at Congress for its dismal show. “In Odisha, Congress got squeezed out of contest. In Maharashtra, it got pushed to 3rd or 4th place in most cities. Results of local polls in Odisha and Maharashtra have shown that BJP is capable of winning major States on its own,” said Shri Jaitley.
Union Home Minister Shri Rajnath Singh spoke to CM Shri Fadnavis to congratulate him on the BJP’s exceptional performance and said the BJP activists have helped expand its base across the state.
Union Urban Development Minister Shri M. Venkaiah Naidu said the BJP’s victory in civic body elections reflect peoples’ faith in BJP leadership. Thumping victory of BJP reinforces peoples’ faith in PM Shri Narendra Modi and CM Shri Devendra Fadnavis, Shri Naidu said.
Union Minister for Surface Transport Shri Nitin Gadkari also applauded the party’s spectacular victory in the state civic elections.