As per the existing political equations in the state, the BJP led NDA, will fight the election battle with its alliance partners – the Apna Dal and the Nishad party, while the opposition Samajwadi Party has announced a tie-up with Shivpal Yadav’s PSP (L), Mahan Dal, OP Rajbhar-led SBSP, RLD, and the Apna Dal faction of Krishna Patel. However, the Congress, BSP, AIMIM, and AAP are going solo in the assembly polls.

The BJP has welcomed the announcement of elections for the state assembly and has launched an aggressive election campaign seeking a verdict for a straight second term based on its stupendous achievements and improved governance delivered over the last five years, notwithstanding the damaging global impact of COVID-19. BJP is not leaving any stone unturned to return to power with an overwhelming majority, that no Party has achieved in recent decades. The party has already released its candidates list for Phase 1 and 2 polls. The first list of 105 candidates also includes Chief Minister Yogi Adityanath and Deputy CM KP Maurya. The party has fielded CM Yogi Adityanath from his bastion- Gorakhpur while Deputy CM Keshav Prasad Maurya will fight from the Sirathu seat in Prayagraj.

In 2017 assembly elections, the BJP stunned its critics by scripting a historic victory in the state – winning 312 assembly seats with a vote share of nearly 40 per cent. This was BJP’s best ever performance in Uttar Pradesh since it got into the electoral fray in the state in 1980. In 2017, the party not only won the maximum number of seats 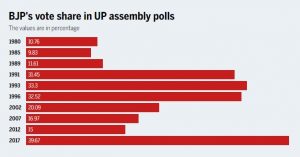 The hallmark of the 2017 assembly elections in Uttar Pradesh was the number of seats the BJP gained and also the huge loss of seats for the Samajwadi Party (SP), which was ruling the state from 2012. While the BJP gained 272 seats, the Samajwadi Party lost 188 seats. The BSP and the Congress were the other major losers in the electoral battle of 2017. The 2017 elections in Uttar Pradesh put the BJP on the top in the run up to the 2019 Lok Sabha elections. The BJP won 62 Lok Sabha seats in the state helping the party secure a huge victory in the 2019 national elections.

In the 1967 elections, the Congress tally fell to 199— short of majority in the 426 seat Assembly and the Bharatiya Jana Sangh, won 98. Kisan leader Chaudhary Charan Singh won the Chhaproli seat by over 52,000 votes and broke with the Congress to form his Bhartiya Kranti Dal (BKD). He was backed by socialists Ram Manohar Lohia and Raj Narain, and Jana Sangh’s Nanaji Deshmukh— and was, in April 1967, sworn in as Chief Minister at the head of the Samyukta Vidhayak Dal (SVD), a coalition ranging from CPI (M) on the left to Bharatiya Jana Sangh, with the Republican Party of India, Swatantra Party, Praja Socialist Party and 22 Independents in between. This was BJS’s first taste of power in Uttar Pradesh. In February 1968, Charan Singh resigned and recommended dissolution of the assembly.

After a year of Central Rule, elections were held in 1969. The Bharatiya Kranti Dal (BKD) won 98 seats and Jana Sangh, 49. Congress won 211 in the 426 member House. The Congress still remained short of a majority by 2 seats but Chandra Bhanu Gupta of Congress returned as Chief Minister.

In the next eight years till 1977, Uttar Pradesh saw four stints of President’s Rule and six Chief Ministers including Charan Singh, who stayed in the office for little over nine months.

In the 1977 Uttar Pradesh elections that took place in June after a spell of President’s Rule, Jana Sangh joined hands with the Janata Party which won 352 of the 426 seats. The Jana Sangh, as part of the Janata Party, participated in Ram Naresh Yadav’s June 1977 to February 1979 government and BJS leaders Shri Kalyan Singh became Health Minister and Shri Keshari Nath Tripathi was in charge of Institutional Finance.

In February 1980, soon after coming back to power at the centre, Smt. Indira Gandhi sacked the Janata Party government in Uttar Pradesh.