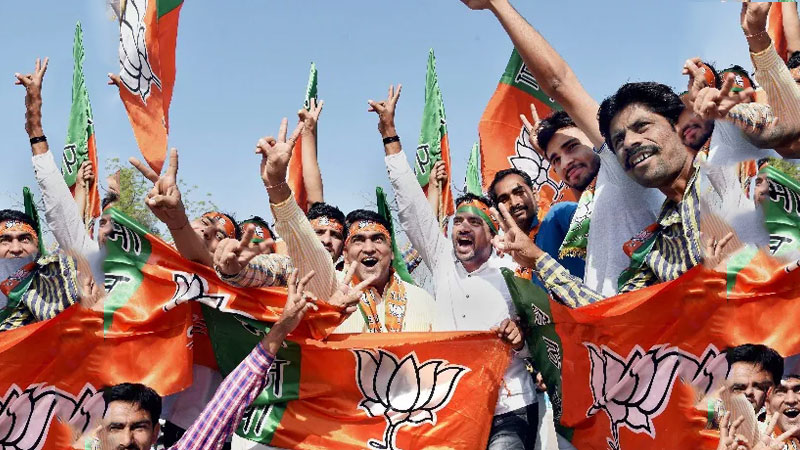 The dates for the upcoming Goa Legislative Assembly elections have already been announced by the Election Commission of India. As per the announcement, Goa will go to the polls on February 14, with all 40 seats to be voted in a single phase. The results of the election will be announced on March 10.

In Goa, the BJP began its political journey as a smaller alliance partner with the Maharastrawadi Gomantak Party (MGP). In 1989, the BJP tried to make inroads into Goa politics and managed to get 0.39 percent of the vote share. But the successful alliance with the MGP gave results for the party in the 1994 assembly elections. Soon

It seems, the electorate of the state is unreservedly supporting the BJP double engine government under the great vision of Prime Minister Shri Narendra Modi and able leadership of Dr Pramod Sawant for the third time in the state to continue with the ongoing pace of development and for the welfare of the poor

the BJP’s vote share soared to 9.5 percent, and the party added four assembly seats to its tally. Within the next five years, the BJP emerged as the main opposition in the state and won 10 seats. From 1999 to 2004, Goa witnessed the rise and fall of governments. Finally Shri Manohar Parrikar formed his first government in the year 2012.

In the last assembly election (2017), the state of Goa witnessed a hung assembly with the BJP securing a high vote share of 32.5 percent. The Bharatiya Janata Party won 13 seats in the 40-member assembly and, with the support of the Goa Forward Party (GFP), Maharastrawadi Gomantak Party (MGP), and two independents, who believe that the BJP is the only party that can lead the state on the path of development, formed the government in the state. And late Manohar Parrikar was sworn in as the chief minister of the state once again. The path shown by the late chief minister, Manohar Parrikar, was perfectly received by Dr. Pramod Sawant, who is now building a strong state on the same path.

The previous Congress governments in the state and in the centre never spared a thought for Goa. Goa’s annual budget under the previous Manmohan Singh-led government at the Centre in 2013-14 was Rs 432 crore. It was the Sonia-Manmohan government and the TMC was supporting it, but Prime Minister Shri Narendra Modi had allocated Rs 2,567 crore for the development of the state in 2021. The major infrastructure projects like the Atal Setu, the Zuari Bridge and the Mopa International Airport were possible in Goa only because of the “double engine” BJP government at the Centre and in the state. The previous Congress government in the state, led by then Chief Minister Shri Digambar Kamat, had nothing to show for infrastructure development and was only involved in corruption.

With the TMC, the NCP, and the AAP also in crosshairs, no party is capable of giving a stable government. Someone wants to be an all-India political party, somebody wants to open their account, but they can’t form a government. Only the BJP can form the government.

The double engine state government has achieved many successes in terms of implementing central schemes and state initiatives for development. The state government has launched “GoaOnline”—an e-governance digital portal where information on all government services is available at the tip of one’s fingers. The portal holds and provides online facilities covering more than 42 government departments and boards. Goa is ranked third in the ‘NITI Aayog’s Good Governance Index 2020–21.’

Apart from this, Goa has provided 100% tap water connections and achieved the “Har Ghar Jal” target on October 9th, 2020, which is four years before the targeted deadline. It is a matter of pride that the state has achieved 100% electrification by providing free electricity connections under ‘Pradhan Mantri Sahaj Bijli Har Ghar Yojana’ (SAUBHAGYA) to more than 1,28,208 households. As a result of effective planning and execution in line with the Swachh Bharat Mission, Goa has become “Open Defecation Free’ in the first phase of the Swachh Bharat Mission by providing toilets to 1,56,743 households across Goa. The State government has successfully implemented the ‘One Nation-One Ration Card’ scheme across the State.

The Goa tourism industry has been the backbone of the state, catering to 40% of the state’s population. The state hosts almost 12% of all the foreign tourists that visit India. With an aim to make Goa the most preferred destination by the year 2024, “The Goa Tourism Policy 2020’ has been framed by the government. The state government has hosted Asia’s oldest and India’s biggest international film festivals—the 52nd edition of the International Film Festival of India (IFFI). More than 148 foreign films drawn from 73 countries were screened, including 12 world premieres, 7 international premieres, 24 Asia premiers, and 74 India premieres.

It seems the electorate of the state is unreservedly supporting the BJP double engine government under the great vision of Prime Minister Shri Narendra Modi and the able leadership of Chief Minister Dr. Pramod Sawant for the third time in the state to continue with the ongoing pace of development and for the welfare of the poor. The common people also know that the BJP is the only party that is committed to making Goa one of the fastest emerging states in the country. Therefore, it is expected that the BJP is heading for a thumping victory in the upcoming assembly elections and will form a stable government that focuses on the all-around development of the state.