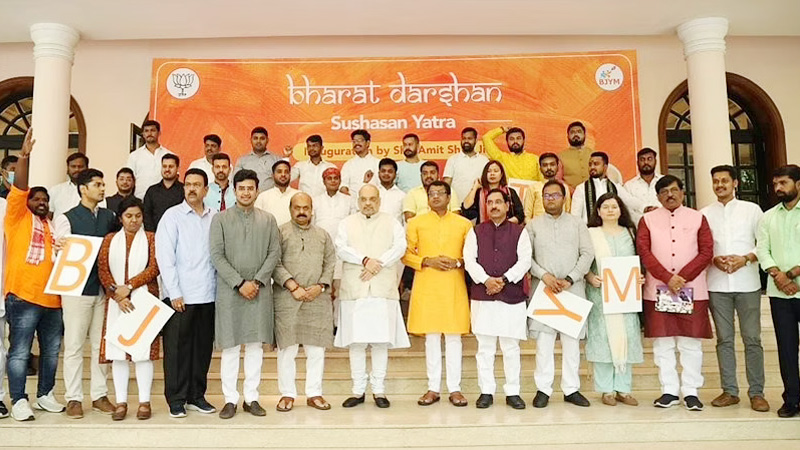 Bharatiya Janata Yuva Morcha (BJYM) joined the nationwide celebration of the Bharatiya Janata Party’s Sthapana Diwas on 06 April, 2022 with a set of unique programmes held in more than 900 districts and booths across the country.

BJYM workers organized a bike rally reflecting the proactive youth workforce for the cause of nationalism and also took out processions for celebrating the occasion with the common populace. BJP flags were hoisted by BJYM karyakartas up to booth level and young BJYM members organised ‘Sanmaan Samelans’ where senior Jana Sangh and BJP karyakartas were honoured.

BJYM karyakartas took blessings of senior BJP and Jan Sangh Karyakartas who have served the nation and its people. BJYM honoured such leaders for fighting against Emergency, instilling cultural and national pride while working on the ground for the expansion of the party in all the sections of society and in making development a mass movement.

BJYM National President Shri Tejasvi Surya participated in the Sthapna Diwas programmes of the BJYM in Gujarat. There, he met senior karyakartas and took their blessings.
He said, “When the BJP started, it had no workers, no money, no public support, no party offices. It only had its ideology. 42 years on, it’s the ideology that has remained intact. BJP is the only political party in India with an ideology with the rest merely existing to claim power.”

Shri Surya also urged youth karyakartas to draw inspiration from the work and efforts of the senior functionaries.

Union Home Minister Shri Amit Shah inaugurated the Bharat Darshan Sushasan Yatra of the Bharatiya Janata Yuva Morcha (BJYM) in the presence of National President of the BJYM Shri Tejasvi Surya and other office-bearers in Bengaluru, Karnataka on 01 April, 2022.

Through the Bharat Darshan, the BJYM karyakartas are introduced to the country’s cultural diversity, traditions and historical richness by experiential tours of its karyakartas to different places. The BJYM functionaries will also get an opportunity to visit the biggest developmental projects of the various states of the country, see places of historical significance and engage in discussions with startups, entrepreneurs, cottage industries and farmer organisations. This will help the BJYM cadres experience and understand the unity in diversity of our country. The Yuva Morcha functionaries are mainly from the Mandal and District level.

The Bharat Darshan Yatra began on 01 April, 2022 from Bengaluru and will last for four days. BJYM karyakartas, mainly from the North and Northeast, will get to experience Karnataka’s rich culture through this Bharat Darshan programme. They will go to Hampi and get a glimpse of the vibrant Vijayanagar dynasty. They will also get to visit HAL and see the production of the Tejas aircraft. With scheduled visits to NASSCOM and Ola, the delegates will understand the city’s startup spirit and draw inspiration from their journeys. Finally, they will push forward Prime Minister Shri Narendra Modi’s vision of a greener future with a visit to the Pavagada Solar Park, the country’s second largest solar plant, in Tumakuru.