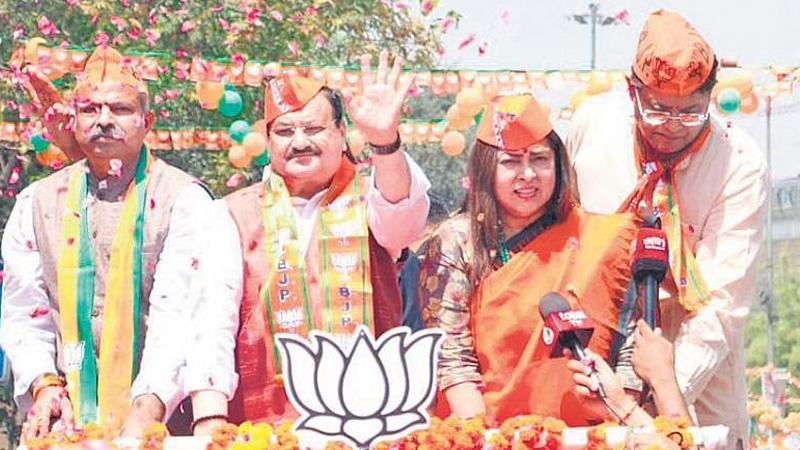 BJP National President Shri Jagat Prakash Nadda participated in the procession organized on the 42nd Foundation Day of the party on April 06, 2022 in Karol Bagh, New Delhi. Addressing the karyakarts on this occasion, the National President said that today crores of workers at more than 8 lakh booths across the country are participating in this celebration with full enthusiasm. On this day, BJP workers are gathering together in about 15 thousand mandals to celebrate the foundation day of the party.

Shri Nadda said that today is a very important day and on this day we must remember those people who have carried forward our journey since the time of Jana Sangh. We have completed a long journey and have immersed ourselves in it. Today is the day to remember and bow down to those people, who did not get anything, but gave their all to strengthen the organization. Therefore, today as the national president of the party, along with crores of workers, I bow to those people who have made the party stronger.

BJP has become the largest party in the world

Referring to the political journey of the party, the BJP National President said that in the last 42 years, BJP has come a long way, has seen many ups and downs. There was a time when we used to have two members in Parliament. The opposition used to make fun of us and say – Hum do Humare Do. Under the leadership of Prime Minister Shri Narendra Modi, BJP has become the largest party in the world. We have more than 17 crore members. We have a strong presence in more than 8.5 lakh booths and this presence is to reach on all 11 lakh booths in the country. Shri Nadda said that under the leadership of PM Shri Modi, the BJP government has been formed at the Center with full majority twice. Apart from this today we have coalition or BJP government in 18 states, and from these 18 states we have BJP government in 12 states. Be it any election, be it the Lok Sabha elections, the Legislative Assembly elections or the municipal elections, the BJP is registering continuous victory. This winning streak has to be carried forward and strengthened. Along with being the largest party in the world, as an elected party, we are moving ahead in the Lok Sabha and Vidhan Sabha.

Shri JP Nadda said that we are in opposition in many states, where our fight is with ‘Parivarwadi’ parties. I believe that ‘Parivarwadi’ parties are a threat to democracy and its soul. We should be proud that today BJP is the only party which is alerting the country about this challenge. Shri Nadda said that nationalism is flowing in our veins, our opponents also believe this. The opposition parties changed their views on Article 370 in Jammu and Kashmir, but the BJP has been saying since 1951 that ‘Do Nishan, Do Vidhan, Do Pradhan’ will not work in one country. Prime Minister Shri Narendra Modi ji’s strong will and Home Minister Shri Amit Shah ji’s strategy has uprooted the Article 370 and has shown the way forward to the dream of ‘Ek Nishan, Ek Vidhan and Ek Pradhan’.