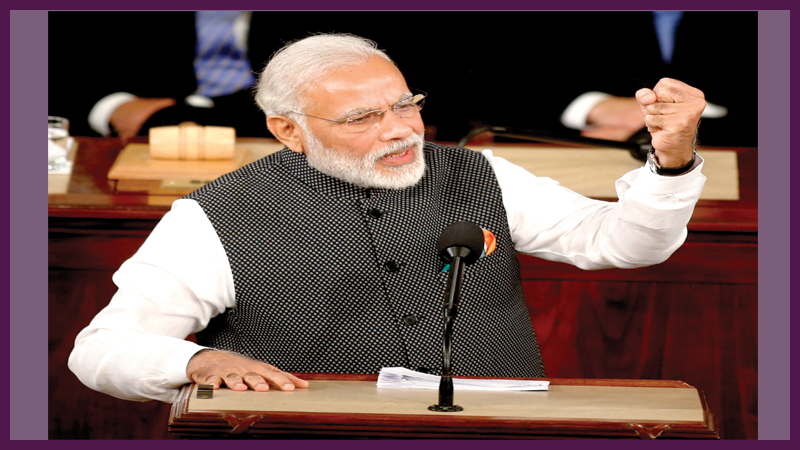 The no-confidence motion brought on July 20 against the Narendra Modi government was defeated by a huge margin in which Modi government got 325 in its favour out of total present members of 451 and opposition got in its favour only 126, after a 12 hour long debate in Lok Sabha. The number, the NDA got, was more than its original strength of 313 as AIDMK sided with Modi government. Prime Minister replying the debate on the occasion lambasted the negative politics of the Congress and urged all parties to reject the motion.

Here, the following are key highlights of the Prime Minister’s reply in the Lok Sabha :

–I urge all parties to reject the motion that has been moved in the House.

–Today the nation has seen the negativity expressed by some members. India saw how some people are so deeply opposed to development.

–In the morning, the voting was not over, the debate was also not over one member comes running to me saying- Utho Utho Utho…What is his hurry to come to power?

–Let me tell this member it is the people who elected us. That is how we have come here.

–What we saw among members of the Opposition was sheer arrogance. The only thing they have to say- remove Modi.

–We are here because we have the blessings of 125 crore Indians. We are not here for selfish interests.

–We have served the nation with the Mantra of ‘Sabka Saath, Sabka Vikas’.

–Our government has the honour of working towards the electrification of 18,000 villages that were in the dark for 70 years.

–Our Government has opened bank accounts for the poor. Earlier, the doors of the banks never opened for the poor.

–It is the NDA Government that is bringing a programme like Ayushman Bharat that will give top quality healthcare to the poor.

–The Mudra Yojana is fulfilling the dreams of so many youngsters. India is making a mark in the start-up eco-system.

–The Indian economy is being strengthened and India is also strengthening the global economy.

–The fight against Black Money is going to continue.

I know I have made many enemies due to this but it is fine.

–Congress has no faith in the ECI, Judiciary, in the RBI, in the International Agencies. They have confidence in nothing.

–One of the leaders spoke about Doklam. The same leader, who believed the Chinese Ambassador over our forces. What have we come to? Everything does not merit a childish conduct.

–Due to one careless allegation in the House on Rafale, both nations had to release statements.

–Congress called the surgical strike a Jumla Strike. They can abuse me as much as you want. Stop insulting the Jawans of India.

–I am chowkidar, I am bhagidar also, but not a saudagar like you. We are bhagidar in people’s sorrows. We share their dreams.

–Look what happened to people who tried to look you in the eye. They were humiliated….Charan Singh, Sardar Patel, MorarjiDesai, Chandra Shekhar, Sharad Pawar…

–There is a conspiracy to push the country towards violence. They emotionally blackmail the have-nots to win elections. These were the people who made fun of Baba Ambedkar but are now singing his praises. Whoever came in front of the dreams and aspirations of one family was pushed to the sidelines.

–The entire nation saw what the eyes did today. It is clear in front of everyone.

–Atal Ji created 3 states- Uttarakhand, Chhattisgarh and Jharkhand. It was done peacefully. These states are now prospering. Congress divided Andhra Pradesh and their conduct then was shameful.

–When TDP was leaving NDA, I called up Chandrababu Naidu, warned him that you are falling into YSR Congress’s trap.
Congress is responsible for division of Andhra Pradesh; NDA Government is committed towards the development of Andhra Pradesh and Telangana.

–Much before Internet Banking, Congress Party invented Phone Banking and this caused the NPA mess. A phone call would get loans for their cronies and the nation suffered.

–This Government stands with the Muslim women in their quest for justice.

–Any instance of violence brings shame to the nation. I will once again urge the state governments to punish those who indulge in violence.


Answering the allegations made by Congress President Rahul Gandhi over the Rafale deal during the no-confidence motion, PM Shri Narendra Modi said due to the careless allegation on the Rafale deal, both India and France had to release statements. There is complete transparency in the deal, he asserted.

He said the nation has been misled on the Rafale deal by giving irresponsible statements, and the national security has been compromised. Without naming Gandhi, Shri Modi attacked the opposition for being pessimistic and misleading the public through false propaganda. This is because the opposition has no confidence in itself, the PM said.

The PM said, “You also called the surgical strike a Jumla Strike. You can abuse me as much as you want but stop insulting the Jawans of India. I will not tolerate this insult to our forces.”

Earlier, Rahul Gandhi contended in Parliament that, “French President Emmanuel Macron had told him that there was no secrecy pact in the contract that forbids Indian government from revealing the price of the jets”.

India and France do have a 2008 security pact to protect classified information that also applies to the deal to buy 36 Rafale fighter jets in 2016, the French government said in a statement. It is seen as the response of France Government to Congress president Rahul Gandhi’s allegation in the Lok Sabha about the Rafale deal.

The statement said there was a 2008 agreement on classified information “that could impact security and operational capabilities” of the defence equipment of India or France. “These provisions naturally apply to the IGA (inter-governmental agreement) concluded on 23 September 2016 on the acquisition of 36 Rafale aircraft and their weapons,” the French foreign ministry spokesperson said in a statement.

Answering on black money the Prime Minister said the NDA government had taken multiple laws and measures to stop the flow of black money. He said the fight against Black Money is going to continue. I know I have made many enemies due to this but it is fine. He said GST is also controlling corruption and black money. GST is not only the victory of integrity but it is also a celebration of honesty.