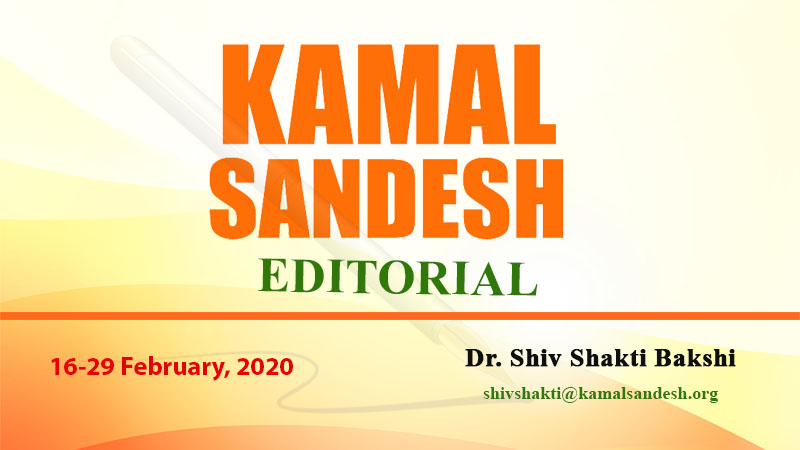 The Budget 2020 has further strengthened the resolve to make India a USD 5-Trillion economy. It has addressed almost every sector of economy while giving a promising outline for future. It entails a broader vision about the economy including current requirements and long term goals along with deeper understanding of the needs and aspirations of the people. The budget has been welcomed by almost every section of the society and different sectors of economy for comprehensively covering various issues of concerns while reassuring the nation of its glorious future ahead. It has laid a roadmap which while adhering to the consistency maintained through earlier budgets of Modi-government, makes attempts to break new grounds with insightful initiatives. It is a welcome blend of action and vision showing the emergence of a confident India which is ready to create opportunities amidst plethora of challenges.

The three themes of ‘Aspirational India’, ‘Economic Development of All’ and ‘Caring Society that is both humane and compassionate’, runs across the budget making it all embracing and all inclusive. While addressing the aspirations of the people the budget has given special attention to agriculture, irrigation and rural development with 16-point programme and allocation of 2.83 lakh crores thus intensifying the efforts made by the Modi-government in last budgets focussing rural economy. In addition to these the budget seeks to address the issue of wellness, water and sanitation which has become so crucial for a healthy and prosperous society. The aspirations of the people cannot be met without addressing the issue of education and skill for which the budget has a huge provision of 99,300 crore. It will create new opportunities in the field of education and skill while leveraging the futuristic sectors.

While addressing the theme of ‘Economic Development for all’, the budget makes provision of 27,300 crore for the development and promotion of Industry and Commerce. In addition to this the Modi-government is set to invest 100 lakh crore in infrastructure in the coming five years which is sure to unleash the huge potential of this sector. The emphasis on building infrastructure pipelines, economic corridors, highways, expressways, coastal and land port roads, electrification of railway tracks, airports and many more such things will definitely help in creating a robust infrastructure of the USD 5-trillion Indian economy. As a commitment to the goals of a ‘caring society’ with ‘Antyodaya’ as an article of faith, provisions in the budget have been made for women and child and social welfare. The budget has also made a provision of 85,000 crore for the welfare of SCs and OBCs and 53, 700 crore for Scheduled Tribes. For the senior citizens and Divyangs, an enhanced allocation of 9,500 crore has been made.

India is today the fifth largest economy of the world which has grown at the rate of 7.4% during the period of 2014-19 with an average rate of inflation of 4.5%. The Modi-government is credited for taking many innovative initiatives which has rescued the economy from the crisis of large-scale corruption, loot of public money, misrule and policy paralysis of Congress led UPA era. It was Prime Minister Shri Narendra Modi’s vision and determination to act strongly even in the face of various criticism that the strength of Indian economy is today getting recognized globally. In the field of ‘Ease of Doing Business’ and in facilitating ‘Ease of Living’, India under the dynamic and visionary leadership of Shri Narendra Modi has become a shining example for the countries to emulate. The Budget 2020 represents the same vision, rigour and strong will to take India forward against all odds and challenges. The Finance Minister Smt. Nirmala Sitharaman should be congratulated for presenting a budget which meets the expectations and requirements of the people. There is no doubt that this budget will create a new milestone in the glorious journey of the nation.