The Central government will provide free food grains to about 81.35 crore beneficiaries under the National Food Security Act (NFSA) for one year from January 1, 2023, the Cabinet led by Prime Minister Shri Narendra Modi has decided on 23 December, 2022.

Prime Minister Shri Narendra Modi “The welfare of the country’s poor is of paramount importance for us. In such a situation, the government has taken this important decision to ensure their food security. More than 80 crore people of the country will get its direct benefit” 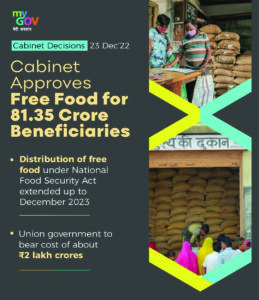 Noteworthy, the PMGKAY was started in April 2020 to help the poor whose livelihoods were shuttered by a nationwide lockdown aimed at containing the spread of the corona pandemic. During the pandemic period, under the visionary leadership of Prime Minister Shri Narendra Modi, for 28 months free distribution of food grains was done under ‘Pradhan Mantri Garib Kalyan Anna Yojana’ (PMGKAY). Under the scheme, 5 kg of wheat and rice is provided free of cost to 80 crore poor per month. The scheme had been in effect for 28 months now. Its latest extension was to expire this month. In the last 28 months, the government has spent Rs 1.80 lakh crore on distribution of free ration to the poor under PMGKAY. In September, 2022 the government had extended PMGKAY for three months till 31 December, 2022.

Now, the Centre will spend more than Rs 2 lakh crore in this period as food subsidy under NFSA and other welfare schemes, to remove the financial burden of the poor and the poorest of the poor, Union Minister of Consumer Affairs, Food and Public Distribution, Commerce & Industry and Textiles Shri Piyush Goyal said while addressing media persons after the Cabinet meeting.

The Minister said this was a historic decision that reflects the sensitivity of the prime minister towards the beneficiaries of welfare schemes.

–He said under the NFSA, subsidized food grain was distributed at Rs 3 per kg for rice, Rs 2 per kg for wheat and Rs 1 per kg coarse grains to beneficiaries.

–The cabinet has decided that the beneficiaries will now receive the food grains free of cost.