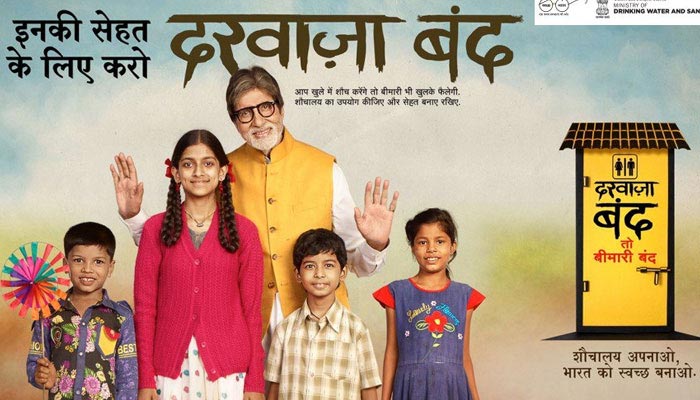 The Centre on may 30 launched an aggressive new campaign titled ‘Darwaza Band’ to promote toilet use and freedom from open defecation across the country’s villages. The campaign produced by the MDWS under Swachh Bharat Mission was launched in the presence of iconic actor, Shri Amitabh Bachchan, Union Minister for Drinking Water and Sanitation, Shri Narendra Singh Tomar, Chief Minister of Maharashtra Shri Devendra Fadnavis, Secretary, Ministry of Drinking Water and Sanitation, Shri Parameswaran Iyer, and other Centre and State dignitaries in Mumbai. The event was widely attended by officials from all the State Districts and selected Gram Panchayat Members.

The Union Minister and the State Chief Minister also reviewed the working of the Swachh Bharat Mission (Gramin) programme in Maharashtra ahead of the event. Champion functionaries from the State of Maharashtra were awarded during the event. An exhibition displaying various toilet technologies was also put up.

The ‘Darwaza Band’ campaign has been supported by the World Bank and is being rolled out countrywide immediately after the launch. It is designed to encourage behaviour change in men who have toilets but are not using them. A part of the campaign also features actor, Ms Anushka Sharma, who will be seen encouraging women to stand up for this issue in their villages and assume a leadership role.