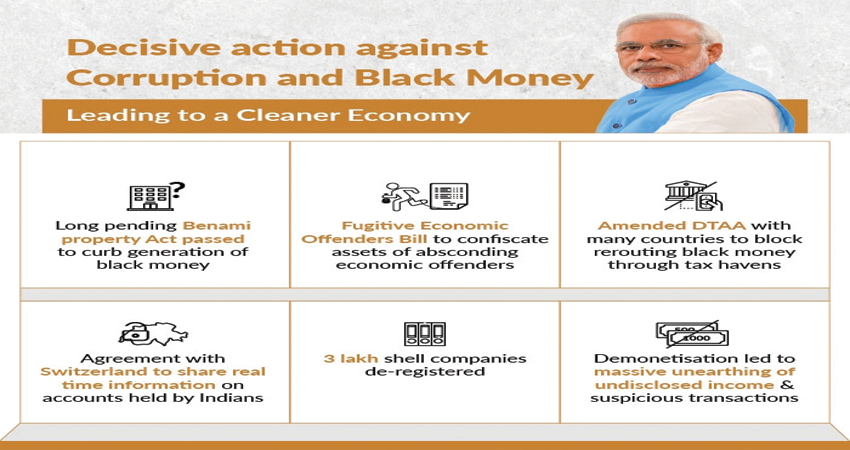 Right from its inception, the NDA government led by PM Shri Narendra Modi has been committed to uprooting corruption. It aims to not only eliminate corruption but institutionalize and nurture honesty.

Not to be restricted to domestic countervailing measures, the government has gone a step further in bringing together a coalition of nation to fight the menace. It has amended the Double Tax Avoidance Agreement (DTAA) with Mauritius, Singapore and Cyprus to block rerouting the black money through the tax havens and signed an agreement with Switzerland to share real time information on accounts held by Indian residents in Swiss banks. 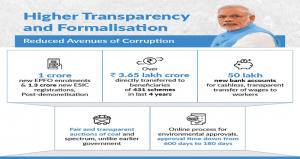 Accompanied with a resolve to end regeneration of black money, a strong start towards a more inclusive economy was made. 50 lakh new bank accounts for the cashless, transparent transfer of wages to workers were opened. Earlier, a big chunk of the government funds disseminated used to get lost in leakages. Bylinking welfare schemes to the Aadhar card and providing it a legislative framework, the government has made an earnest attempt to plug the leakages in the Public Distribution System and made direct transfer a viable option for disbursement of government funds. Over Rs 3.65 lakh crore has been directly transferred to the bank accounts of beneficiaries of 431 schemes in the last four years.

In an innovative step to ensure transparency, Environment Ministry started process of online submission of applications for Environment approvals, bringing down the approval time from 600 days to 180 days. Further, it made it possible for applications to be tracked online, minimising chances of human intervention to extract bribe for getting project approvals. Similarly,abolishing interviews for on-gazetted posts, has ensured that genuine candidates are selected based on their merit.
A decisive multi-pronged action has not onlylaid a solid foundation for economy to grow but has also positively impacted the personat the last mile. A clean, transparent and resilient economy is, therefore, setting grounds for New India to take shape.