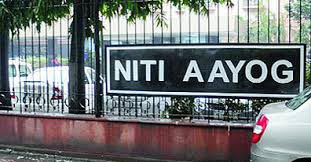 Commenting on five year plans way back in 1958 in his book “The Two Plans: Promises, Performances and Prospects”, Jansangh ideologue Pt. Deendayal Upadhyaya doubted whether centralised economic planning can be concordant with democracy and the need of essentializing socialist economy with planning. While scrutinizing the relation between annual budget and plans covering a definite period he was of the opinion that real solution to Indian problem may hardly be sought in political and economy ethos developed in West. He advocated a new process of thought in consonance with Indian environment. NITI Aayog aims to process the methods of planning within the framework of Indian realities while seeking solutions in the context of larger goals. NITI Aayog’s mandate to prepare ‘Three Year Action AGENDA (TYAA), Seven Year Strategy (SYS) and Fifteen Year Vision (FYV)’ documents may be seen in such an alternative economic vision for the country which differed from hitherto followed Nehruvian economics drawing heavily from the Western economic models.

As the 12th Five Year Plan formally ended in 2017 NITI Aayog has come out with TYAA document outlining the approaches towards new policy initiatives to be taken between 2017-18 and 2019-20. The document is supposed to be in alignment with the Seven Year Strategy and Fifteen Year Vision documents which is under process now. While covering a wide range of issues, the TYAA is infused with a new vision and goals. A document divided into seven parts and 24 chapters promises to conceptualise development strategies in contemporary idioms. While it spells tentative medium term fiscal management it never loses focus on agriculture, industry and services. The aim of doubling farmers’ income and creation of high productivity jobs in industry and services if achieved can take the economy on a high growth trajectory. It also promises to turn focus to rural sector talking about rural transformation while simultaneously giving impetus to urban development by coining new regional strategies. The document has an interesting feature when it talks about growth enablers in terms of Transport, Digital Connectivity, Public-Private Partnership (PPP), Energy, Science and Technology and Innovation and Entrepreneurship. In building an inclusive society it acknowledges the role of health, education and skill development. It also deals with governance, taxation, competition and rule of law discussing a plethora of much needed reforms in judiciary, police, legal framework, law and order and justice delivery system. It appears to be comprehensive while addressing the issue of sustainability taking into account environment, forests and management of water resources.

The goal of doubling farmers’ income by 2022-23 is a crucial component of the TYAA which has detailed the challenges and the strategies required to meet them. Even while acknowledging the dependence of majority of people on agriculture in India, rarely governments are seen prioritizing it with well set targets which are ambitious as well as achievable. Although agriculture is a state subject yet the dependence of vast majority of people currently estimated to be around 45.7% on it requires central government to intervene through central sector and centrally sponsored schemes. Also, there are issues which cut across borders of the states and calls for effective coordination in terms of marketing and movements of agricultural produce. To ensure that farmers get optimal returns of their produce the current system needs massive overhauling in implementation of MSP and existing agricultural marketing system. While MSP procurements cater to selected commodities within a limited geographical reach, the agriculture marketing suffers from policy distortions, fragmentation resulting from large number of intermediaries, poor infrastructure, lack of vertical integration and stranglehold of official mandis. The TYAA has rightly emphasised the need to reform Agricultural Produce Marketing Committee (APMC) Act and Essential commodities Act while acknowledging the role electronic-National Agriculture Market (e-NAM) which can play important role in correcting the system. These initiatives may go a long way in creating a new agro ecosystem in the country.

While the need of second green revolution is being felt in the face of stagnating growth in agriculture sector, boosting productivity is also a major challenge. Although India appears self sufficient in food grain production, it has yet to reach optimal productivity level matching the global standards. The situation can be understood from the fact that second crop is grown in less than 40% of the land and it’s even as low as 25% in some states. The TYAA focuses on irrigation, seeds, technology and a shift to high value farm products such as fruits, vegetables, milk, eggs, chicken and fisheries for boosting productivity in a sustainable manner. Accelerated Irrigation Benefits Programme(AIBP), Har Khet Ko Paani, Per Drop More Crop and Watershed Development under Pradhan Mantri Krishi Sinchayee Yojana (PMKSY) is set to provide a sound framework for effective use of water in irrigation. The document also talks about a vibrant, responsive, market oriented and globally competitive agricultural research ecosystem. The attempt to enhance horticulture, dairying, poultry, piggery and small ruminant husbandry activities may help in substantially increasing the farmers’ income. The focus on addressing the problem arising from traditional way of landholding patterns, record keeping and innovative methods of leasing land for farming may pave the way for use of advance methods and technology in agriculture sector.

In the fast changing global economic scenario the TYAA has attempted to engage with policy initiatives connecting diverse fields within a strategy framework. In dealing comprehensively with the Indian objective to eliminate poverty in all its dimensions the document has a transformative agenda not only for agriculture sector but for the entire economy. It has to be accepted that without revolutionising agriculture the growth trajectory of 8% plus in the coming two to three years may not appear achievable and as the TYAA seems to have recognized this fact its claim of having an alternative economic vision and much needed policy framework may not be disputed. While critiquing the manner in which planning was done without taking into account the Indian realities, requirements and problems, Pt. Deendayal Upadhyaya was of the opinion that only decentralized, agro-industrial rural society can be the backbone of our economy. It remains to be seen as to how effectively TYAA, SYS and FYV are linked together to present a holistic vision for the country while prioritizing the agriculture sector at the same time. If NITI Aayog does it, no one will deny that Indian economy ambitious targets can be met with effective implementation. It will also be credited for conceptualizing developmental initiatives and contextualizing the policy frameworks within the Indian realities.

(The writer is National In-charge, BJP Journals and Publication Department)