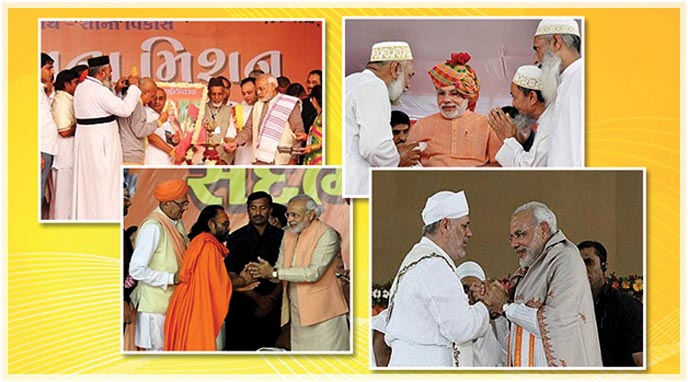 Communal politics, which ironically passes for Secularism in India, has been the bane of Indian politics. The genesis of it can be traced to the British policy of ‘divide and rule’. The ultimate result of this policy was the tragic partition of India. The Indian Constitution, therefore, was a complete repudiation of these kinds of ideas and the politics that perpetuated it. It considered and rejected the suggestions of separate electorate for the minorities and the proportional representation system, which it felt would lead to a perpetually enervated nation. But in most of the policies followed till now we have seen furtherance of vote banks politics. The narrative has to change.

The recent events, particularly The Public Interest Litigation (PIL) filed by a Ankur Sharma in the hon’ble Supreme Court of India and the subsequent affidavits by the Central and State Government of J & K gives us a fresh chance to look into the whole issue of secularism v/s communalism debate in light of Minorities Commission and the Constitution.

The Constitution of India recognizes religious and linguistic minorities and has given them the fundamental right to protect their culture, script and language under Articles 29 and 30. It has, however, not defined or identified religious and linguistic minorities. The question of level of administration for the identification of religious and linguistic minorities was also left unanswered. This was finally settled by the Supreme Court in the T.M.A. Pai Foundation & Ors v/s State of Karnataka & Ors wherein the Court held that for the purpose of determining minority, the unit would be the State and not the whole of India.
To look into many of the issues, Minorities Commission was set up by a Ministry of Home Affairs resolution dated 12.01.1978 to ensure that the minorities are able to enjoy the safeguards provided for them in the Constitution and various Central and State laws. National Commission for Minorities Act was passed in 1992 to give a statutory backing to the Commission, to henceforth be known as the National Commission for Minorities. According to section 1(ii) of the Act, it extends to the whole of India except the State of Jammu and Kashmir and as per section 2(iii) ‘minority’ for the purpose of the Act means a community notified as such by the Central Government. Using this power, the Central government though a Gazette notification dated 22nd October, 1993 notified Muslims, Christians, Sikhs, Buddhists and Zoroastrians (Parsis) as ‘minorities’ for the purpose of this Act. Jains were declared as minority later.

According to the 2011 census, out of 28 states and 7 union territories, Hindus are religious minority in 7 states and 1 UT. They are Arunachal Pradesh, Jammu and Kashmir, Manipur, Meghalaya, Mizoram, Nagaland, Punjab and the UT of Lakshdweep. When we specifically look into the of affairs in J&K we notice that Hindus have been at the receiving end of majoritarian wrath and the Constitutional guarantee of liberty of thought, expression, belief, faith and worship are being violated here. It is also relevant to talk about the status of West Pakistan refugees living here. They had migrated from then West Pakistan at the time of India’s partition. The reports suggest that they are about 2.5 lakhs Hindus. They are not recognized as state subjects and denied the most basic human rights.

Though the Act nowhere makes it mandatory for the States to have a Minorities Commission of their own. 18 out of 29 states have their own Minorities Commission. However, what is most important to note, whether all get the benefits of being a minority community in all the states, where they are in minority! For example, in the State of Punjab, Hindus consist only 38.4% of the total population but they have not been notified as minority in the Punjab State Commission for Minorities Act, 2012. Similar is the case in many states. To insist on special dispensation for minorities and deny Hindus minority status where they are entitled to, as is being done by various political parties, isn’t is amoral?

Further, The Supreme Court judgment in 2011 in Bal Patil and Anr. v/s Union of India and Ors (the case had come to the apex court in appeal as the Mumbai High Court had rejected the demand of a section of Jain community to issue a direction to the Central Government to declare Jains as minority under section 2(iii) of the Minorities Commission Act) had said that the National and State Minorities Commissions should direct their activities to maintain the unity and integrity of India by gradually eliminating the minority and majority classes. It also said that Minority Commission should act in a manner so as to prevent generating feelings of multiculturalism in various sections of India. But rejecting all this, the then UPA government, went ahead and declared Jains as a minority community in 2014, before the elections, just keeping in mind the vote bank politics.

In all earnestness, we need to move beyond this binary narrative of minority-majority. Our government is committed to the philosophy of ‘Antyodaya’, i.e, working for the benefit of the last person in the queue. It does not want to look at citizens through the prism of caste, religion, language or sect. Our focus of pro poor economic policies and empowerment of farmers, backward classes and women will bring positive results, where there is equal opportunities for all and appeasement of none. ‘Sabka Saath Sabka Vikas’