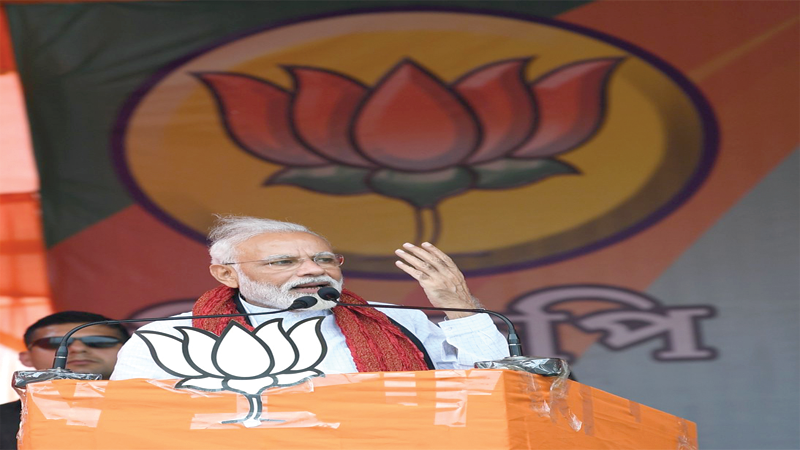 Prime Minister Shri Narendra Modi addressed two large public rallies in Junagadh and Songadh in Gujarat on 10 April, 2019. Lashing out at the Congress for the ‘Tughlaq Road Chunavi Ghotala’ in which huge amounts of illicit cash has been discovered by the Income Tax officers during their recent raids in Madhya Pradesh Congress aides, Shri Modi said, “People have seen how huge amounts of cash have been discovered from senior Congress people. This is the latest scam of the Congress-‘Tughlaq Road Chunavi Ghotala.’ This is the money that Congress politicians have diverted from welfare schemes of the poor and are using it to enrich themselves.”

Enlisting the significant milestones achieved by the government since 2014, the Prime Minister said that while the country had taken rapid strides in improving the lives of its people, it was noteworthy that this government had achieved all this despite being totally free from corruption, a malice that was endemic in Congress years.

Urging his supporters to turn out and vote for the upcoming Lok Sabha elections in support of the BJP, Prime Minister Modi asserted that only the stability, transparency and decisiveness of a BJP government can fully address the issues of a developing economy like India while also working tirelessly towards fulfilling the aspirations of the young, 21st century India.

‘‘New India’ has an uncompromising stance on national security’

Criticising the TMC government of Bengal, PM Shri Narendra Modi said, “Didi’s frustration and anger against me is a sign of her fading political influence in Bengal and the country and that is why she is abusing me and the BJP day in and out as she knows people of Bengal have rejected her opportunist politics and now she is scared of losing the support of the people.”

Describing how the BJP government has won the trust of millions of people across the country, PM Modi said, “Our good and clean governance is one of the big reasons that people trust us. They know that now nothing is impossible as long as the ‘Chowkidar’ is in power. Earlier, it seemed impossible that nearly every Indian household will have a bank account but we have made it possible. Similarly, it seemed impossible that almost every Indian household will have access to clean cooking fuel but we made it possible. The last five years have demonstrated what our great country is capable of achieving with a strong and decisive government in power.”

Lashing out at the previous governments for compromising stands on national security, the Prime Minister said, “Terrorist attacks across the country had become common before 2014. Now India responds strongly to any attack that is done against us. We hit these terrorists where it hurts them the most, even if it means going inside a country to destroy their terror camps. This is a ‘New India’ which does not tolerate any attacks against its people and has an uncompromising stance on national security.”

Concluding his address among the large crowd of supporters, PM Shri Modi took on the TMC government in Bengal for inciting political violence against BJP workers in a bid to silence criticism and said that such acts have further strengthened the resolve of the BJP workers to ensure that democracy returns to Bengal and urged his supporters to vote for the BJP and put an end to this culture of violence against political opponents that has become so endemic in Bengal under the TMC government. He said that the cultural heritage of Bengal is one of tolerance, knowledge and respect for democratic values and that the TMC government led by Mamata Banerjee was totally eroding the cultural ethos of Bengal by indulging in political violence.

‘We have destroyed the ecosystem of corruption’

Addressing a huge public meeting in Udaipur, Tripura Prime Minister Shri Narendra Modi on 07 April, 2019 said, “The dreams and aspirations of new India’s new Tripura are huge. Aspirations and dreams of the nation can be respected only when all the country’s resources have equal rights.”

Showering praise on Tripura’s Chief Minister Biplab Deb, the PM said the state government has improved the law and order situation and developed infrastructure in just one year.

He said that, “Tripura government is directly procuring from the farmers, benefiting the people. We have destroyed the ecosystem of corruption comprising of middlemen.”

Under the Saubhagya scheme, our government has ensured power connection in almost all homes in the state, the PM noted. “As promised before the assembly election, we have initiated work on broad gauge rail line, built bridges, started train services, connecting Agartala with other parts of the country. Work is also underway to give Maharaja Bir Bikram Airport an international makeover,” he added furthermore.

Hitting out at the Congress and the Left Front, Prime Minister Modi said the opposition parties were hell-bent on removing him from power, even if that meant singing paeans to Pakistan.

PM Modi asserted that the opposition parties could stoop to any level to remove him from power. “Am I not doing the right thing by giving a befitting reply to the enemies of the country?” he asked the people who gathered at the rally.

PM Shri Modi said the people of Tripura has set a precedent for the entire country by ousting the Left Front government after 25 years. Attacking the Left parties, he said, they consider their party’s constitution bigger than that of the country’s. “The Left parties don’t want to give the country a direction. They are only keen on improving their own condition,” the PM highlighted.

“Under Mudra Yojana, over lakhs of people from Manipur have been given loans without any guarantee, in which 60,000 are women,” he further added.
The PM remarked, “It’s your blessings that any government is witnessing pro-incumbency for the first time. People have anger against the opposition and not the ruling party.”

Attacking the Congress, he said that for the first time, India carried out attacks across the border against the terrorist hotbeds but the Congress and its allies were supporting divisive parties and people. “Congress doesn’t trust our Armed Forces. Congress leaders are mouthing Pakistani propaganda and is standing with those who say Jammu and Kashmir should have two Prime Ministers,” said the PM.