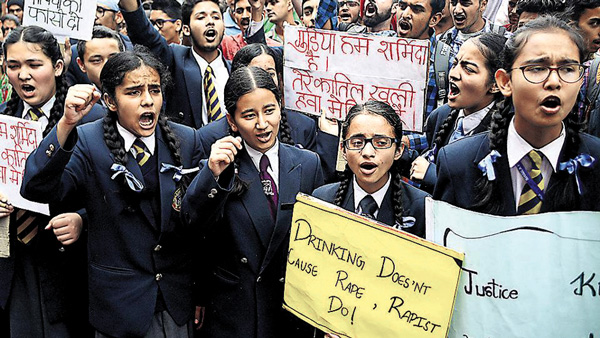 With tainted CM Virbhadra in saddle and mounting public ire

The devbhoomi Himachal Pradesh during the last almost five years of Congress rule under present Chief Minister Virbhadra Singh has lost the holy halo because of rampant corruption, maladministration, criminalisation of politics, sheltering the guilty leaving innocent to the mercy of criminals. State’s image got further tarnished when the chief minister himself was every other day seen standing in courts facing charges of corruption and money-laundering.

It was Virbhadra Singh’s ‘war against corruption’ that had catapulted him as CM in April 1983 dethroning the then Congress CM whom he had accused of being hands-in-glove with ‘forest mafia’. What an irony that at the fag-end of his life and political career he himself and his family stand charged with corruption in courts.

The State already suffering from the pangs of development because of paucity of revenue, mounting unemployment, ever bulging administrative bill, was subsisting on the benevolence of the Modi Government at the Centre. Whatever development is visible is courtesy the funds sanctioned by the Union government. Even here Congress government has been found wanting in utilising funds and carrying out Central schemes in an earnest manner.

Miseries of people got further aggravated by worsening law and order situation. The State which once felt proud of being a peace-loving State with dacoity, harassment of women and the like started competing with Delhi and Mumbai.

Recent incidents of gang-rape of a 16-year old minor school girl in Kotkhai village (Shimla), another by a teacher at far-flung village Tissa (Chamba), murders of forest guards at the alleged hands of forest mafia have made the people of the State hang their heads in shame.

The rape case of the Kotkhai girl is the most curious. Even after a month the police have not been able to determine the place where she was raped and murdered. First, CM’s media cell uploaded photographs four youth suspected to be involved and then abruptly deleted these. This generated a sense of suspicion among people. In anger people agitated at the girl’s village, area and the district. There were violent protests all over. Angered people even manhandled district police chief. Although after two-three days the police did arrest six people for the alleged crime, yet the people were not satisfied. They alleged that the administration was trying to protect the real culprits belonging to high-ups. Failing to assuage the high tempers of people, CM was left with no alternative but to hand over the investigation to the CBI.

The mystery further deepened by the murder of one of the accused Suraj Singh, 29, a Nepali national, allegedly by the main accused Rajinder Singh alias Raju within the Kotkhai police station premises where all accused had been lodged.

HP High Court has also issued notice to the CBI to file periodic reports about the progress of investigation.

CM who hails from the same district and who once represented Kotkhai assembly constituency where the rape crime occurred has, so far, not been able to visit the area.

The rape of Tissa school girl by a teacher of school where she was studying acquired a communal tinge as victim and accused belong to two different communities. People from girl’s community led by a local Congress leader beat up teachers which flared up communal tension. The situation became so tense that CM who was scheduled to visit Tissa for a pre-planned public function cancelled his visit. Peace has since been restored and culprit arrested.

Pressure is mounting on State government to hand over investigation of murders of forest guards too to CBI.

All this has dented Congress and CM Virbhadra’s image. At 83 it may be his last electoral fight in November-December. Added to this is the internecine fight between him and State Congress President Sukhwinder Singh Sukhu. Congress has a bare minimum majority of 35 in a 68-member house.

Congress too seems unwilling to stake its future on Virbhadra. Newly-appointed Congress incharge, Sushil Kumar Shinde, has declared that ensuing assembly elections shall be fought under collective leadership and nobody shall be projected a CM candidate.

Union Health Minister JP Nadda, former CM Prem Kumar Dhumal and State BJP President Satpal Satti are at the vanguard of the electoral battle to the finish. They have the brahmastra of PM Modi’s popularity in the State. BJP is sure to bounce back to victory and power.