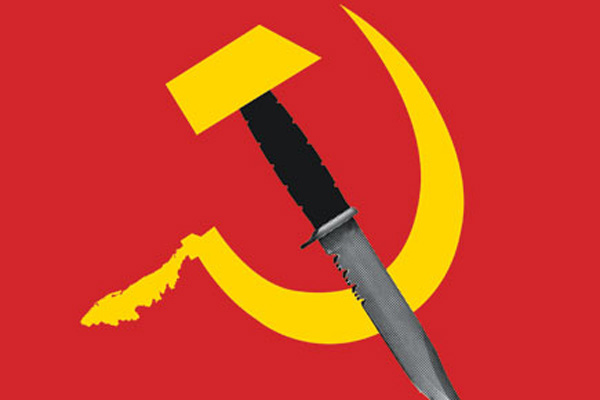 No state in India has witnessed as many political murders, violence and attacks on houses, women and children to polarize society on ideological grounds as in Kerala under Marxist regime. In the last fifteen months the CPM goons have unleashed a reign of terror, in general, and targeted killings of its chief ideological rival, the BJP and RSS. Last week the “CPM Talibanism” was trending in the social media, because of a picture of a 32 year old Sangh local Karyavah, Rajesh, who was sliced to death savagely by the red lumpens in the state capital. He belonged to a weaker section, made a living as an auto driver, and left two small children and young wife orphaned. The heart wrenching picture had both hands chopped off the body and kept between the legs of the victim. The gruesome murder shocked the state, which observed a complete hartal, and thousands of people participated in the funeral procession. This was the culmination of a week-long violence in Trivandrum when houses of RSS BJP leaders and the state BJP party office was attacked. With the CPM goons are getting state patronage, the police is acting as the baton arm of the comrades, suppressing its rivals and the law and order in the state has collapsed.

After the latest round of violence the Governor intervened and asked the Chief Minister to act. The Union Home Minister Rajnath Singh asked for report and expressed anguish over the breakdown of public safety. The BJP-RSS campaign now is centred on “Right to Live”, which has under the CPM become the costliest. Expressing solidarity with the hapless party cadre, last week Union Finance and Defence Minister Arun Jaitley visited the family of Rajesh in Trivandrum. The RSS Saha Sarkaryavah, Shri Dattatreya Hosabole who is monitoring the Sangh response in the state addressing a press conference in New Delhi said there was no guarantee to life and property in the state and law and order machinery has collapsed. He demanded the centre to assess the situation in the state. The worse part is that the CPM is making heroes out of the murderous gang it is patronizing and trying to make icons out of them. The main accused in a number of revenge killings are today celebrated leaders of the party.

So far over three hundred Sangh supporters have lost life in CPM attacks. This is a national record. No other party has lost as many lives and no other political party other than CPM has the unsavoury record of killing so many political adversaries. The state under CPM rule is perpetually on violence mode but there is a spurt almost every three or four months.

In March, Kerala had seen three gruesome political murders, a bomb attack on the meeting addressed by CPM state general secretary Kodiyeri Balakrishnan and a number of VIP visits in the Chief Minister’s own assembly constituency Dharmadom, in Kannur district. Elsewhere in South Kerala in Kollam district three persons were admitted to hospital in critical condition due to CPM attack on BJP workers. In the same period two persons including a 35 year old woman Vimala were burnt to death two others — one of them a 11-year-old — are fighting for life when CPM goondas set the BJP worker Janardan’s house on fire at midnight in Palghat. The macabre nature of the political rivalry, their turf and clannish underbelly, brazen political indulgence by the ruling party have become so intriguing that they have given wings to many gripping film scripts, most of them by fellow-traveler film makers who try to romanticize the class war in the CPM killing fields of Kannur.

In the mid-sixties as a school going child I have undergone the agony of my house being surrounded by CPM goons. Then the fight was not between the RSS and CPM. It was between the Karshaka Sangam of the Kerala Congress representing the farmers and the farm labourers under the CPM opposing modernization of farming in Kerala. My father, a senior Kerala Congress leader and Panchayat president was facing murder threat for trying to replace plough with tractors. That was the time when the entire farm land in the state was undergoing transition and the comrades resisted it, spreading large scale agrarian unrest. As the ruling party the labour unions enjoyed official patronage. Father was in hiding along with other farmer leaders. One day at mid-night they surrounded my house with torch, axe and heavy weapons. They entered the veranda pulled the chairs sat on them and I could hear the sound of heavy metals being placed on the cement floor. They were waiting thinking the father was inside. After waiting for an hour they left on getting a message that only the children and mother were inside the house. Then, they were kind enough to leave us unhurt.
In five decades the CPM has only become more barbaric and brazen. The tectonic changes in political fortunes and technology have not refined their ideological war chest. They have only become more beastly.

Killing political opponents has been a long time tactics of the CPM. Every party in Kerala, even its own ally, the CPI has been on the receiving end. In May 2016, when the Left Front gained power it was expected that the CPM will turn a new leaf, and the declining graph of the party nationally will force it to modernize and democratize its cadre. That did not happen. Instead it identified the Sangh and BJP as its chief adversaries and as if in a well thought-out strategy went about annihilating and attacking the BJP cadre. Hundreds of workers of the Sangh were maimed in these attacks. The BJP and RSS held a number of protests throughout the state. Twice the BJP state leaders met the central leaders and pleaded for intervention and placing Kannur under central forces. A number of state leaders have been provided central security as they fear threat to their lives. But these leaders are saying that they want to surrender this cover as their party workers are anyway unsafe.

Drawing the national attention to the CPM atrocities has been the strategy of the pariwar. The Sangh is also retaliating democratically with full force. But two things stand out. Firstly while the BJP is growing in the state, the CPM strategy is to project itself as the main Hindu party. For this, the CPM has made many tactical compromises like getting active in Hindu festivals, celebration of Sri Krishna Jayanti, Vivekananda Jayanti and adoption of the teachings Hindu icon Sree Narayana Guru. Secondly the fact that CPM is in power, it is using the administrative machinery to protect its own cadre and torment the RSS Pariwar. This is why the Pariwar is looking for national response. The BJP central leadership has sent two party teams to study the situation in the recent past. Lumpanisation of Kerala polity is proving fatal for the CPM for its onward march as it is with an intellectual façade that it tried to establish a presence at the national scene.