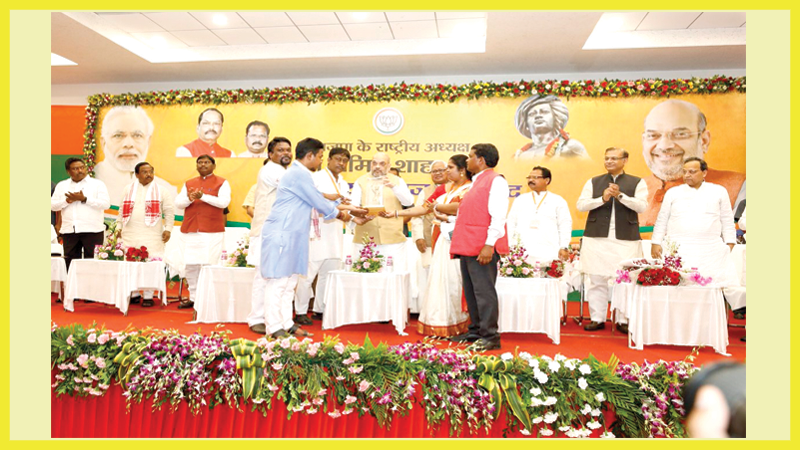 The BJP National President Shri Amit Shah was on a one-day pravas to Jharkhand on 11 July, 2018 to tone up the party organisation ahead of next year’s Lok Sabha election and addressed a function of intellectuals of Janjatiya Samaj.
Besides meeting the intellectuals, the BJP President held meetings with BJP’s assembly constituencie’s in-charge and office-bearers of the party at party office. He also met volunteers of the party’s social media unit.

Party National President said the Congress merely talked of “garibi hatao” (remove poverty) during its 60-year rule whereas Prime Minister Shri Narendra Modi took various initiatives to transform the lives of tribal and poor people as he, having lived in poverty, knew what it was to be poor.

Shri Shah said the Congress kept the tribal and poor populations underdeveloped, but the Narendra Modi government gave them priority in development leading to their all-round progress in just four years.

Shri Shah said, “How life is without electricity? What happens to the poor when he or his family is struck by any disease? And this is the reason his government is administering the country on the philosophy of ‘Sabka Saath, Sabka Vikas’ (collective efforts, inclusive growth),” he said.

Accusing the opposition of misleading the people against the Centre and the BJP-ruled state governments, he said, “What the four-year-old Narendra Modi government did, the Congress failed to do in 60 years of its rule.”

He said that when the NDA government was formed, PM Modi had promised that the government would be of the poor, the Dalits and the tribals and it had worked in that direction only. And it has shown results as vaccination for all most all the downtrodden including ST families has been completed, crores of bank accounts have been opened under the Jan Dhan Yojana, 10 crore poor families, that is, 50 crore people are being insured under the new health insurance scheme for Rs five lakh, he said listing the NDA government’s achievements.

He informed that the Modi government has electrified 20,000 villages of the country that remained without electricity even after 60 years of Independence and most of these villages were tribal-dominated or remote.

Shri Shah said that it was a historic decision on the part of the Modi government to raise the minimum support price (MSP) for Kharif crops to one-and-half times the cost of production.

He appreciated the works being done by the Raghubar Das government in Jharkhand. The state government was committed to providing electricity to all homes in Jharkhand by this year-end.