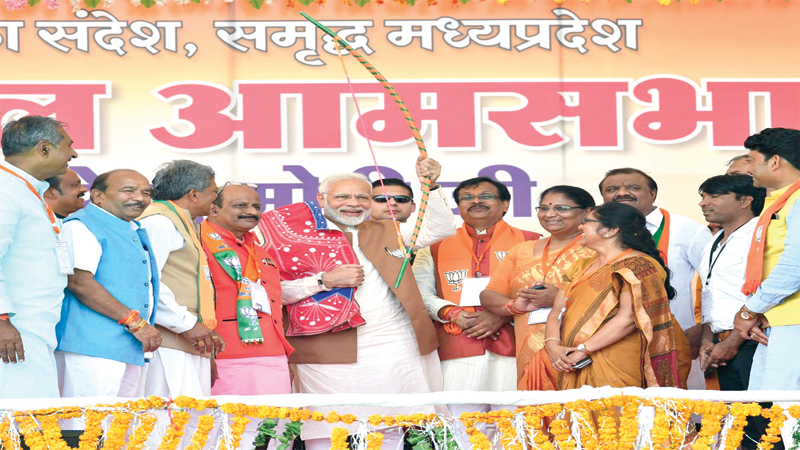 The first rally in Jhabua began with Prime Minister Shri Modi lauding the ancient ecological heritage and conservation practices of India’s tribal groups living in areas like Jhabua. The PM said that the tribal groups of India have been living in harmony with the environment for centuries and the world has a lot to learn from these groups when it comes to sustainably fight climate change.

The PM later heavily criticized the Congress for its decades of misrule and poor governance in Madhya Pradesh and in the country too. He described how the times of Congress-led government in Madhya Pradesh led to widespread corruption, farmer woes, unemployment and crime. He said that he was certain that the people of Madhya Pradesh would never want to elect such an incompetent government again.

Shri Modi further mentioned key government initiatives like the PMGSY, MUDRA, Doubling Farmers’ Income by 2022 and Housing for All by 2022 as pillars of his good governance strategy. He said that this government works for the benefit of all, not the few and the people are free to judge the government’s action and achievements with the works of previous Congress governments and then decide themselves based on facts which government is truly efficient.

The second major public meeting for the day was held in Rewa where PM Shri Narendra Modi shared a historical anecdote about Tansen, Birbal and the tale of two folk-singers from Gujarat, Tana and Riri to describe how Gujarat and Rewa shared a historical bond. He further described how the enthusiasm, support and blessings of common people motivated him to work round-the-clock for the country’s development.

As the public meeting progressed, the Prime Minister launched a scathing attack on the ‘remote-control’ government of the Congress that despite ruling the country for several generations, failed to deliver equitable development to the country’s citizens.

He mentioned many instances of the states that have not let the Congress party form a government for two or three decades. He said this happened because people in these states understood the deceptive and ineffective politics of Congress leaders who always compromised development for their personal benefits.