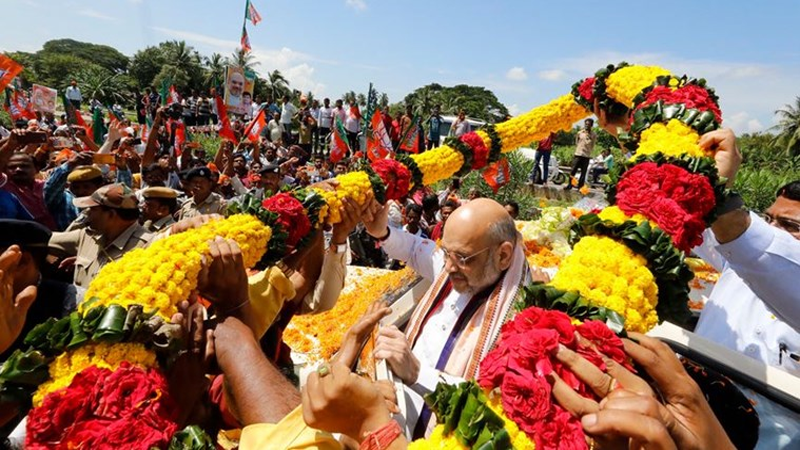 Addressing a rally in Bhopal, Madhya Pradesh ahead of the November 28 Assembly election, Shri Shah asked the Congress to give an account of what the four generations of the Nehru-Gandhi family did when they ruled the country.

The BJP President said the Modi government launched 129 developmental schemes in four years. “Give an account of what the four generations (of Nehru-Gandhi family) did when they ruled the country,” he said.

Mentioning Rahul Gandhi, Shri Amit Shah said, “In a recent rally, (Congress chief) Rahul Gandhi uttered PM Shri Modi’s name 44 times in his 22-minute speech. I am wondering whether he is campaigning for the BJP or the Congress,” he said.

Shri Shah alleged that former Prime Minister Manmohan Singh had left the Indian economy at ninth position in the world in 2014, which, he said, the BJP raised to sixth position. “By the time counting of these polls is done, India would have surpassed the UK to become the fifth-largest economy in the world,” he added.

BJP National President Shri Amit Shah on November 16, 2018 said the Congress did not care about the nation’s security when it “ruled India for 70 years”, adding securing the borders was a major achievement of the Modi-led government.

Addressing a poll rally, Shri Shah credited the Modi government with giving impetus to boosting the country’s security. “When the Congress was in power and Manmohan Singh was the prime minister, Pakistani terrorists used to infiltrate, explode bombs and go back,” he said.

There was anger across the country after the 2016 Uri attack in which 18 Indian soldiers were killed. But this was not the regime of Mauni Baba (Manmohan Singh). Modi ji ordered our jawans to conduct surgical strikes and take revenge,” Shri Shah said.

He said the difference between the BJP and the Congress is that if one wants to become the prime minister or the president of the Congress, “they have to take birth in the Nehru-Gandhi family while in the BJP, one can rise to the top based on abilities even after being born in a poor family”.

“An example of this is Narendra Modi, who was born in a tea seller’s family but is now the prime minister. Shri Shivraj Singh who took birth in a poor family of farmers, is working from the last 15 years to develop Madhya Pradesh as Chief Minister,” he said.

“One does not need to have a family to work and go ahead in the BJP. What is needed is the ability and resolve to serve people,” he said.

Shri Shah sought to know who was the “Senapati” (army chief) of the opposition party in Madhya Pradesh poll arena. There is only a Raja (Digvijay Singh), a maharaja (Jyotiraditya Scindia), and an industrialist (Kamal Nath) and the Congress is fighting polls on their strength,” he said.

“Congress had left Madhya Pradesh as one of the most backward states but I can proudly say today that Shivraj Singh has made it into a developed state,” he said.