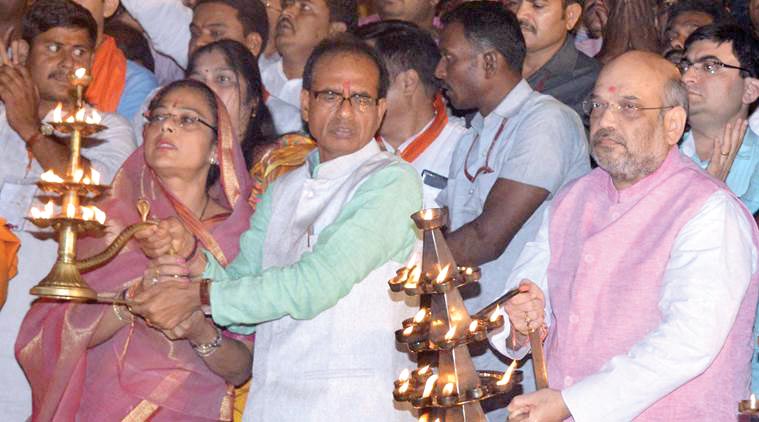 The yatra, aimed at galvanizing the public for conserving river Narmada, which started on December 11, 2016, will culminate on May 15, 2017, with the participation of PM Shri Narendra Modi. BJP National President Shri Amit Shah said that after the completion of ongoing Narmada Sewa Yatra campaign, the river will be ranked among the cleanest in the world. Praising Madhya Pradesh Chief Minister Shri Shivraj Singh Chouhan for launching the initiative, Shri Shah said, “Once this conservation campaign is over, Narmada will be ranked among the cleanest water bodies of the world, like Thames in London and Rhine in Switzerland.”

Shri Shah was addressing a gathering at Gwari Ghat on Narmada at Jabalpur after taking part in `Namami Devi Narmade – Sewa Yatra’, a campaign for conservation of river Narmada.

“Like Narmada, one day the Ganga too would be cleaned as the Prime Minister Narendra Modi has also launched `Namami Gange’ campaign,” he said. Shri Shah added, “We’re hopeful that with a BJP government now in UP, the combined leadership of the PM and the UP CM will also work for purging of the river Ganga.”

Shri Shah said Just like our PM has been working for the cause of the environment with a missionary zeal, MP CM Shivraj Singh Chouhan too, has been making conservation of Narmada a public movement. He also recounted how Narmada river water was linked to several rivers, including Sabarmati in Gujarat in the past. “Madhya Pradesh CM have linked the Narmada river into Kshipra river. Before, this as CM of Gujarat our present PM Shri Narendra Modi linked Narmada river to many rivers in Gujarat, “maintained Shri Shah. Shri Shah also praised the Chouhan government for its drive against liquor shops within five kilometers of Narmada’s banks as a part of the campaign.

Earlier, addressing the gathering Madhya Pradesh Chief Minister Shri Shivraj Singh Chouhan announced that a massive tree plantation drive will be organised on the banks of river Narmada, spanning from river’s origin Amarkantak in Anuppur district to Barwani and Alirajpur districts. Lakhs of people will plant crores of saplings of trees like Neem, Pipal and Banyan on Narmada River on 02 July, he said. He added that the annual agricultural growth rate of MP has been as high as 20% since last four years. “We expect it to be 25% this year,” said Shri Chouhan.

He further announced a slew of measures to keep river Narmada clean, spanning from setting up a crematorium to establishing changing rooms for women on Narmada river bank. Speaking about sand mining in river Narmada, he said that any vehicle now caught mining sand in the river will be confiscated and won’t get away merely with payment of the monetary penalty.